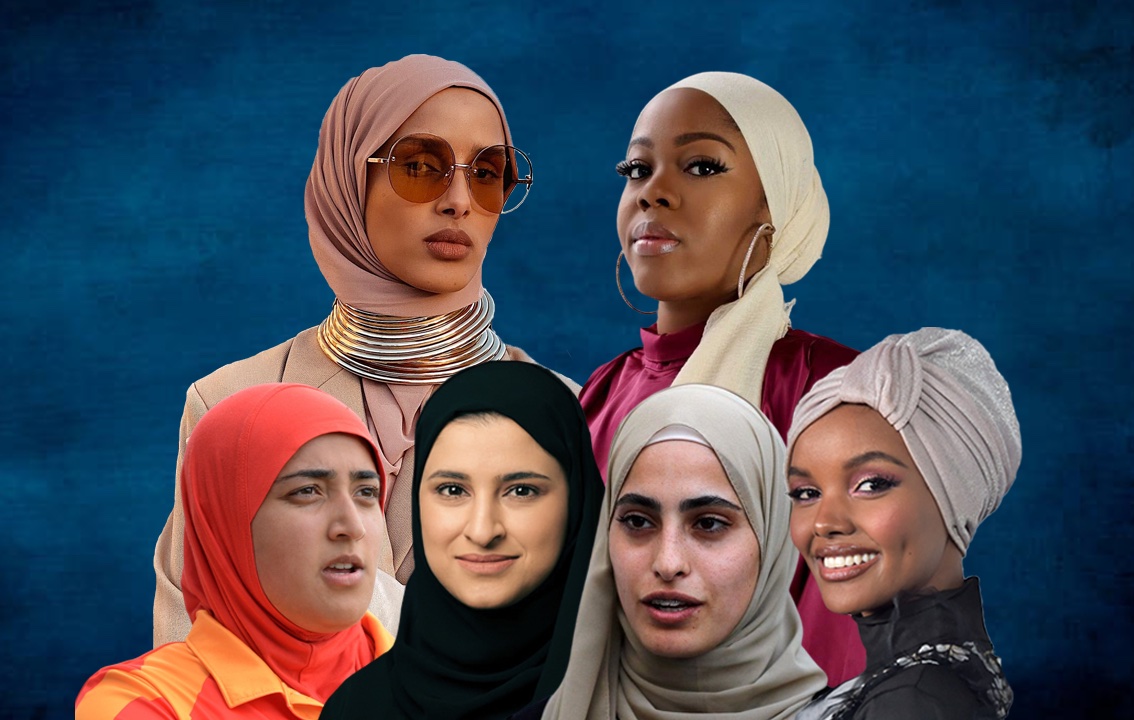 Dilshad D. Ali, blog editor at Haute Hijab, gives us a rundown of six hijabis that broke boundaries and excelled in 2021.

Fast bowling on the cricket pitch, a return to the modelling world on new terms, changing the public conversation around Palestine and leading a space agency — these were some of the ways Muslim women around the world blazed trails last year.

This year pushed and challenged us with the ongoing COVID-19 pandemic as well as a continued reckoning with social, racial and climate justice. Through it all, a number of Muslim women continued to break boundaries in STEM, fight against injustices and forge new paths in the fashion industry.

It’s so challenging to create this list because too many extraordinary Muslim women who did big things inevitably get left out. But we couldn’t let 2021 end without bringing you a few of their great accomplishments.

Here are six Muslim women to remember from 2021.

Rawdah Mohamed, the model behind the “hands-off my hijab” campaign, was named the new editor of Vogue Scandinavia, which launched in August.

In her Instagram post announcing her editorship, she wrote, “I’m hoping to be a cultural force with lots of learning, growing and facing the challenges that come with it. Hope you all are as ready and proud as I am for this.”

She added, “I don’t perceive myself to be a correction to anything. If I can help the overall industry progress in the process, then it is a wonderful addendum that I have always advocated for.”

Vogue Scandinavia is publishing six print editions a year but will primarily focus on digital content.

Muna and Mohammed El-Kurd, a sister-and-brother team in Palestine, helped harness the power of social media to bring attention, sympathy and support to Palestinians in a way that hadn’t been done before.

Their media appearances and advocacy work on Instagram and other social media helped push forward an international shift in the rhetoric around Israel and Palestine garnering increased sympathy and support for the Palestinian fight for justice and freedom.

Muna (and her brother) made it to Time Magazine’s 100 Most Influential Persons of the Year in 2021 by challenging “existing narratives about Palestinian resistance through viral posts and interviews, humanising the experiences of their neighbours and pushing back against suggestions that violence was being predominantly carried out by Palestinians.”

She is also chairperson of the country’s space agency, Mohammed Bin Rashid Space Centre, which developed the Hope orbiter (or Al Amal), in conjunction with University of Colorado Boulder, University of California-Berkeley and Arizona State University.

The UAE, along with India and the European Union, successfully sent a spacecraft into orbit around Mars.

At age 33, Al Amiri is one of the youngest ministers worldwide and is also the youngest to lead a space agency.

If you don’t know Abtaha Maqsood’s name yet, you should. Maqsood is a cricketer making a big name for herself in the game as a talented bowler.

She plays for Birmingham Phoenix and the Scotland national team and says playing sports was drilled into her and her siblings from a very young age by her father.

Maqsood was Scotland’s flag bearer at the 2014 Commonwealth Games in Glasgow and also part of the Scotland national team at the 2017 Women’s World Cup qualifier.

She cites legendary bowlers such as Shane Warne as well as Sri Lankan and Pakistani players such as Imran Khan as her initial inspiration. But as she grew up and learned more about the sport, she turned to women like Australia’s Ellyse Perry and Meg Lanning to hone her cricketing skills.

Halima Aden, a superstar model and one of the first hijab-wearing models to break ground in the mainstream modelling world, left fashion after challenging the industry with a public display of accountability.

She spoke about how her foray into mainstream fashion modelling had her at odds with how she wanted to wear hijab and uphold her Islamic ideals. She decided to “take ownership of her experience and her hijab journey, and that meant stepping away [in late 2020] from the industry to truly reflect on what was most important.” wrote Haute Hijab fashion writer Hakeemah Cummings.

Aden made a return to fashion in 2021, but this time working as the Global Brand Ambassador for Modanisa, one of the largest modest fashion brands in the world, saying that the brand shares “my faith and values, and fully respect my choices as a Muslim woman.”

Jameelat Bakare snagged one of the most coveted opportunities for beauty bloggers by becoming part of the Sephora Squad  in 2021.

“Black Muslim women have taken many strides in being a part of the beauty community and I’m grateful, Alhamdullilah, to be among those who get to represent us,” said Bakare.

Sephora launched their squad program in 2019, which has turned out to be the centerpiece of the firm’s influencer-marketing efforts.