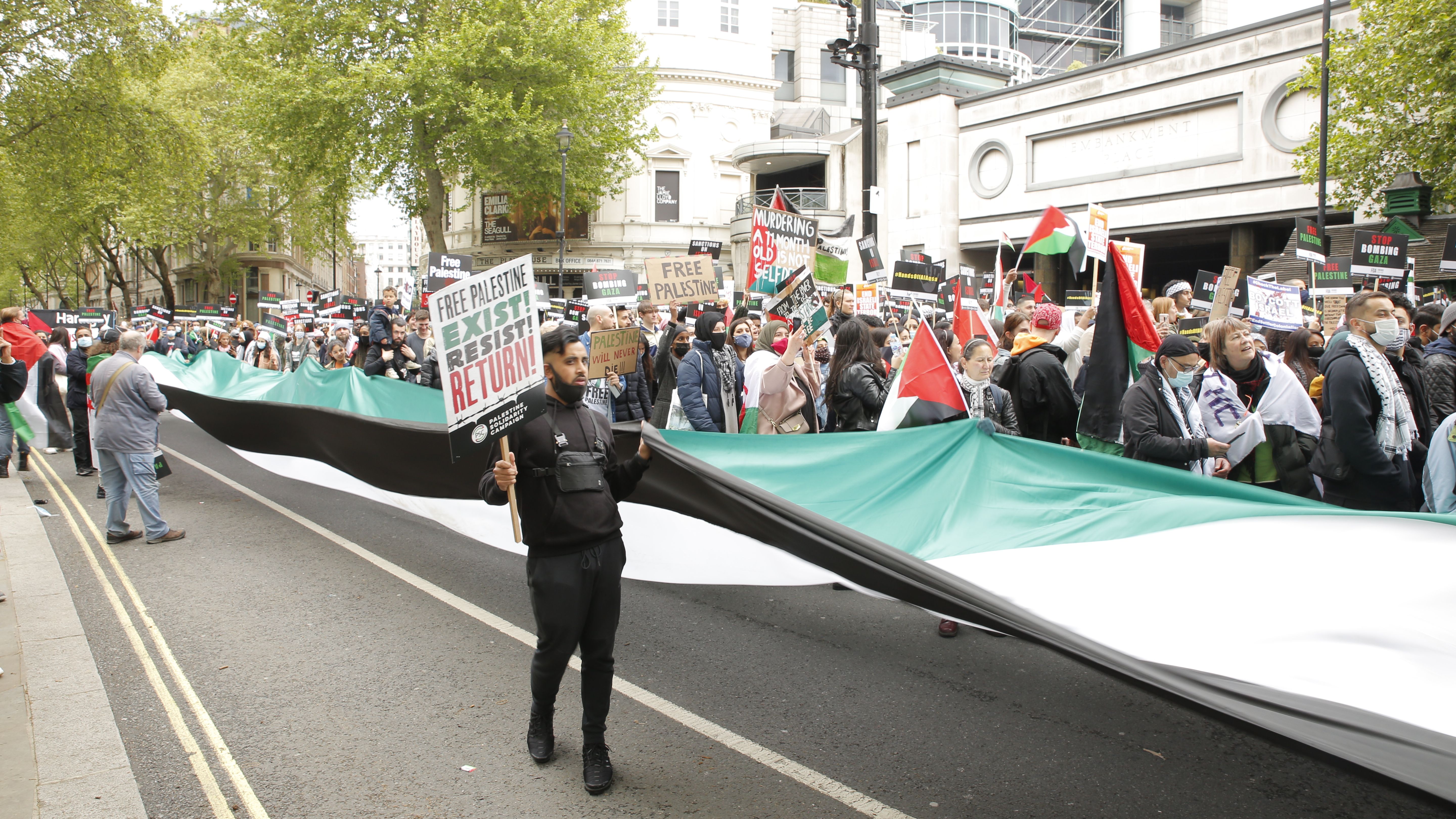 According to organisers, Palestine Solidarity Campaign and Friends of Al-Aqsa, around 180,000 people took to the streets of London on Saturday in what was Britain's biggest pro-Palestine rally ever.

The march took place the day after a ceasefire between Hamas and Israel commenced on Friday 21st May. There were also demonstrations throughout the UK, including in the cities of Birmingham, Liverpool, and Nottingham.

Despite the ceasefire, there had been reports of fresh clashes between Israeli police and worshippers at Al-Aqsa Mosque in occupied East Jerusalem.

﻿Protestors began their march on the Embankment as they made their way past the Houses of Parliament and Downing Street and along Oxford Street, finishing up at Hyde Park, where there were speeches made on stage by the likes of Labour MPs and anti-war campaigners.

Even in the evening, convoys of cars could be seen driving around central London, displaying Palestinian flags.

Jeremy Corbyn who was present at the demo, spoke exclusively to Islam Channel about the plight of the Palestinians:

“In my speech I made it clear that I’d asked the British government for an answer to my questions about the supply of British weapons and I did not get a satisfactory answer. So I made a very clear call here today: weapons supplies to Israel must stop. The bombardment of Gaza, the ICC enquiry that’s going on will show how dangerous it is to pump more weapons. What we need is peace. End the occupation, end the siege of Gaza, rights for the refugees and recognise Palestine.”

"Yes, a ceasefire has been negotiated, and we welcome a ceasefire. But let's be clear, there will be no ceasefire in our campaign to boycott, disinvest and sanction the Israeli apartheid state. The message is clear, we will not cease our campaign in solidarity until there is justice. So let's make it clear, no justice, no peace."

In a recent report, UN independent human rights experts highlighted the ‘vast asymmetry of power’ between Gaza and Israel and called on the International Criminal Court to investigate the attacks on civilians and “gross violations of human rights”.

Destruction of Gaza in numbers based on reports from the UN's independent human rights experts:

11 days of missile attacks by Israel

63 of the Palestinians killed were children

42 Palestinians including 10 children were killed in a single night

450 buildings in the Gaza Strip destroyed or damaged by missiles

74,000 Palestinians displaced by force and made homeless – mostly women and children

Eye on Palestine - a week-long programming special on Islam Channel

To find out the latest about what is happening in Palestine and see highlights of Saturday's London march, tune in to Islam Channel tonight (Monday 24th May) at 9pm. Catch our daily specials every day this week. Check out our TV Guide for up-to-date timings.