British Museum in Islamophobia row after Muslim visitors asked, "Where is the dynamite?" 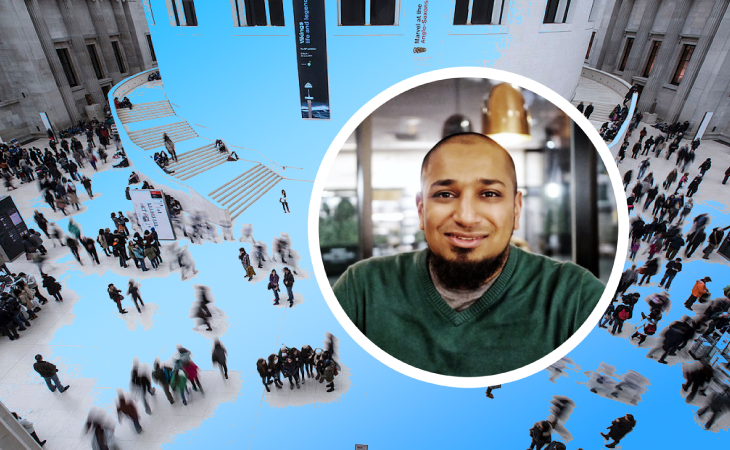 When two Muslims from Birmingham went to the British Museum for a company away day, they did not expect to be embroiled in an Islamophobia row after a security staff asked them where they hid the 'ticker' and 'dynamite.'

Altaf Kazi and his colleague Umar Malik were on a recent trip to London when the shocking incident happened.

They were with two other colleagues, who went through the museum’s bag security without a glitch. But for Altaf and Umar, the experience was not so seamless.

"When I got to security, I was asked, 'Where is the ticker?'" Altaf, Head of Partnerships and Community Engagement at NHS Blood and Transplant, tells Islam Channel.

Altaf tried to laugh it off but the security guard went on to say, "You shouldn't be killing humanity. You should be saving humanity."

He waited to see if his colleague Umar, the Partnerships Manager at NHS Blood and Transplant, would get any comments. Like Altaf, Umar is also Asian with a beard.

"When he approached the table, he was asked, 'Where's your stick of dynamite,'" says Altaf.

"The more our initial shock waned, we started to think, actually, this isn't right, this isn't okay. I remembered a very famous statement: 'what you walk past is the standard you accept.'"

The comment about 'killing humanity' upset Altaf the most.

"I work in the NHS; what more do you want me to do to help in the cause of saving humanity?" he says.

"And I think the Quranic verse came into mind as well. I didn't know whether he [the security guard] was making reference to the verse or whether he was just saying something. But I was like, you just don't understand how important it is for us to save humanity, to save an individual."

They reported the incident to the information desk, who were "visibly shocked" and the manager was called down "immediately" to deal with the situation.

Shining a light on social media

Altaf's social media post about the incident gained traction and the mainstream media picked up the story as well.

He posted on LinkedIn to "show colleagues that things like this exist" and give confidence to Muslims and others that face discrimination that "they can do something."

"All change is based upon us chipping away at these things. And I think the way we chip away is ensuring we report them, and asking for responses once they have been reported," he adds.

The British Museum had said in an earlier statement that the pair "chose not to make a formal complaint." But Altaf says he did not know what the process of making a formal complaint was and neither was one offered to them.

"I wasn't sure; what is formal and what is informal? Calling your manager down seems to be pretty formal, if you ask me," he says.

Altaf's company has asked the museum for an update on what it is doing about the incident. And on LinkedIn, he received a "couple of messages" from British Museum staff from minority backgrounds, who alleged that they have experienced similar incidents.

"I want to ask what confidence and assurance can they give me as an individual that they're going to take this seriously," says Altaf. He also wants the museum to undertake a listening exercise with its staff from minority backgrounds to improve their experience.

Altaf adds: "When I look back at the whole incident, I think it tells us as a society, we've still got a long way to go in trying to come to some form of equity."

"And I think that's really important to remember that we are at this moment on a journey, and we have a role to play within this journey.

Response from The British Museum

The British Museum told Islam Channel in a statement. “We offer our sincere apologies to Mr Kazi and Mr Malik and provide our assurance we consider the alleged behaviour to be completely unacceptable.

"We immediately began an investigation on site and which is ongoing, and we are treating this matter with the upmost seriousness."

Islam Channel also raised some of the points Altaf made about the complaints process and the messages he received from staff at the museum.

"Our formal feedback and complaints policy is on our website and we can be contacted via email." the British Museum added in the statement.

"We are always open to hearing about experiences first-hand and ensure we can learn and make any changes or improvements to our operations where necessary.

"We are an inclusive and diverse community and we do not tolerate discrimination of any kind, including racism. We have well established processes in place to enable colleagues to raise concerns and our HR team are available to provide help and support as appropriate.”