Commonwealth Games: The Muslim athletes to keep an eye on 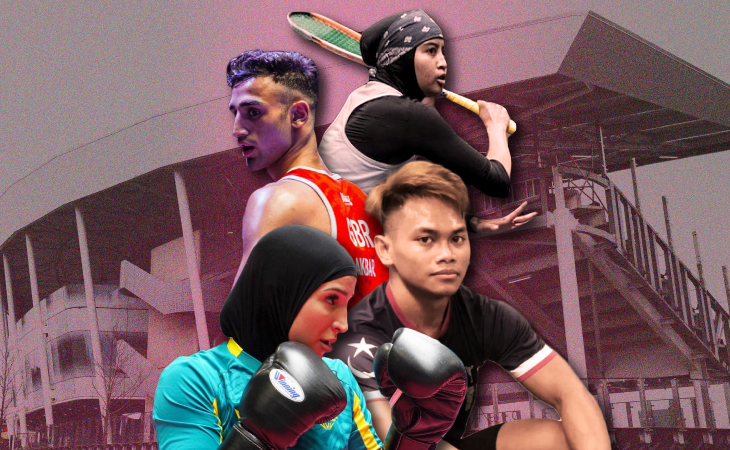 The Commonwealth Games 2022 are well underway with many Muslim athletes competing in the tournament in Birmingham.

Here's a look at some of the Muslim sportsmen and women you should keep tabs on during the competition and in the future.

Tina Rahimi was already making headlines before the Games started — the hijabi is the first Muslim woman to box for Australia at a Commonwealth Games.

Tina’s journey into the sport started five years ago when she enrolled at an all-female boxercise class. Six months later, she stepped into the ring for her first bout.

Now the featherweight boxer is in Birmingham, looking to add to Australia's medal haul.  "First step in securing the GOLD medal In Shaa Allah (God willing). My success is only by Allah and whatever he wills, will be," she said in a recent Instagram post.

The former makeup artist has talked about the importance of her faith and how she prays for her and her rival's safety before each fight.

Harris is one of the favourites for gold in the light middleweight division (71kg). But he has a tricky test in the quarter-finals, facing Olympic bronze medallist Aidan Walsh from Northern Ireland.

A massive martial arts fan as a child, his boxing journey started when a local coach came to his father's butcher's shop and asked him to bring Harris down to the boxing gym. And since then Harris has been hooked.

Malaysia has quite a few Muslim medal contenders. It has already racked up three golds, mainly thanks to its weightlifters.

Compatriot Muhammad Aznil bin Bidin made it a double celebration for Malaysia as he took gold in the Men's 61kg category.

DON'T ATTEMPT TO GIVE UP!!!

This is the story of Islamiyat Yusuf @birminghamcg22.

She first 'Lule', she came back stronger to finish her lift with a BRONZE medal in the 64KG Women's Weightlifting event.

Staying with weightlifting, a 19-year-old picked up Nigeria's fourth medal of the Games.

Islamiyat Yusuf powered her way to the bronze in the 63/64 kg category. She lifted 93kg in snatch and 119kg in clean and jerk, and the combined 212kg was enough for her to get on the podium.

The youngster started weightlifting in 2014 and soon realised she had a knack for the sport — she won three gold medals in her first international outing.

Squash player Aifa Azman saw her challenge for a medal fizzle out in the third round of the Games.

But the 20-year-old has a big future ahead. At 16, Aifa was the youngest winner of the Professional Squash Association Tour in 2018 and she has already taken her title tally to double figures.

Aifa, who is ranked 24th in the world, had the privilege of being Malaysia's flag bearer during the opening ceremony.

Javelin thrower Arshad Nadeem is one of Pakistan's big medal hopes in the tournament.

Just a few weeks ago, he became the first Pakistani to qualify for the World Athletics Championships final. Last year, the javelin thrower just missed out on an Olympic medal after finishing fifth during the Tokyo Games.

Having won gold during the 2019 South Asian Games, many Pakistanis will be hoping he can medal again this weekend.

6 Muslim baby traditions you should know about
Muslim comings and goings in the Premier League
What's on Islam Channel this August?