Hindu calligrapher's art is in over 200 Indian mosques 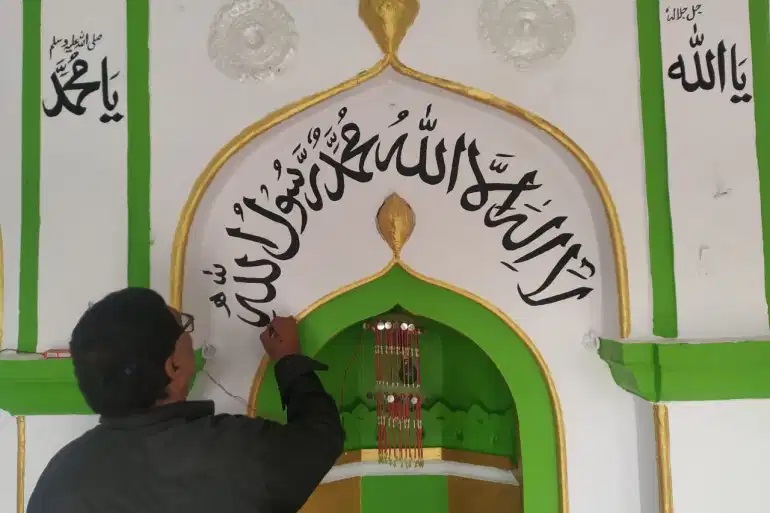 A Hindu man has painted over 200 mosques across India, in a career spanning 30 years.

50-year-old Anil Kumar Chowhan is a self-taught calligraphy artist from Hyderabad, who was first inspired to paint signposts on shops in Urdu to earn a modest living.

"I belonged to a very poor Hindu family and had to give up my studies after class 10 to support my family. I was good at drawing, so I thought why not leverage this skill to take up signboard painting as a career," he says. "I was paid a Hadiya. I worked for free for the other 100. I felt a spiritual connection to the places which prevented me from demanding compensation,"

Anil also says that he earns about $350 a month for his work painting across the country - he explains how people recognised his talent.

"It was during my painting assignments that I learned to read and write Urdu. Soon people started acknowledging my talent and gave me opportunities to beautify landmark architectures around the city with the verses of the Quran," he says.

Even though Chowhan has mostly painted mosques, he has also painted over 30 Hindu temples and monasteries. But he also gained a love for all things relating to Islam. And being Hindu, Chowhan did not understand Arabic script or Urdu. But this was something he learnt over time in Hyderabad, as it's a majority Urdu speaking city.

"Over time, I started recognising the words and alphabets and slowly and organically developed an interest in it. In my spare time, I started writing the Urdu script, copying words from textbooks which further helped my craft," he says. "I was over the moon. Bagging that big assignment was proof that not only was my talent recognised, but that I had also received the stamp of approval from the city's elite which would open doors for me. And it did."

Although most people love his work, he has also faced opposition for the sole reason of being Hindu. But Chowhan believes that we can live together as one, no matter the religion.

"I believe art has no religion. Today, most of my friends are Muslims. We eat together, hang out together, participate in mehfils [gatherings] and enrich each other's lives," says Chowhan. "During the holy month of Ramadan, I am the busiest, moving quickly from one mosque to another to give out Allah's message of peace through my art. But it doesn't feel like work. I love doing such assignments."

"Mosques, temples, monasteries, I have embellished them all. All these places give out the same message of love, peace and the oneness of humanity. Religion is a unifying force, not a divisive one," he says. "If we follow God's teachings, we can all live harmoniously, and the world will be the richer for it."