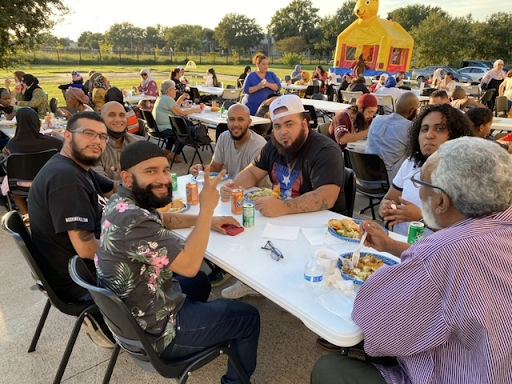 "The team from Salams - the marriage, friendship and networking app - tell us why they sponsored an Eid Carnival at the ONLY Spanish-speaking mosque in the United States."

“Eid Mubarak!” and “Feliz Eid!” (the Spanish equivalent) were the joyous greetings heard at the 'Feliz Eid Carnival.' The event was held in Houston, Texas at a unique mosque called IslamInSpanish Centro Islamico — the only Spanish-speaking mosque in the United States.

Salams app is big fans of IslamInSpanish and we were proud sponsors of the event as our goals aligned with the organisation. It was a great way of bringing the Muslim ummah together in a positive way, so the collaboration was a no-brainer for us.


The goal of the event was for Muslims to feel unified and celebrate Eid Al-Fitr. Some Muslims, who are new to the Islamic faith, may not feel like they have anywhere to go for Eid. So, the festival created a welcoming environment for people to celebrate together.

There were several activities for people to enjoy, including pony rides, a petting zoo, henna, food and, of course, piñatas!

What is IslamInSpanish Centro Islamico?

IslamInSpanish was established in Houston, TX in the wake of 9/11. Its purpose is to educate the local Latino community, which makes up about 45% of the city’s population, about the truth of Islam in their native language.

Initially, the organisation’s founding members operated out of the city’s almost 100 mosques. Now it runs out of the Centro Islamico, which opened in 2016. IslamInSpanish has featured in Spanish media outlets including CNN in Spanish, Univision, Telemundo, and other print media.

Having started with just three people who wanted to provide Islamic resources in Spanish, it’s turned into something much bigger. Today, the mosque is looking at undergoing a $3 million renovation and is setting a new standard in creating a welcoming non-judgemental environment for all Muslims.

When one thinks about the disconnect young people have to the Islamic faith currently, it’s a critical welcoming space, especially for the large Latino community in the US. You can read more about the origin of IslamInSpanish here.

Marriage in the community

So how does the centre approach marriage in the community?

The main Imam, Isa Parada, takes marriage resumes and matches people based on what they’re looking for. He educates people about the marriage process and the Islamic rights of everyone. After going through the Ahkam (rulings) of marriage, he certifies the individuals and confirms that they can move forward with the ceremony.

InshaAllah, IslamInSpanish and the Salams app are discussing the possibility of joining forces to optimise the process of marriage seeking within the community.

IslamInSpanish is now raising funds for its construction project. What started off as an agency to create Islamic knowledge resources in Spanish, has evolved to a safe space for Muslim reverts and all Muslims to connect. You can donate now and get your sadaqa jarria.

*Sponsored content: Salams is one of Islam Channel's commercial partners