Islamophobic and racists chants during "hate-fest" march by Israeli extremists 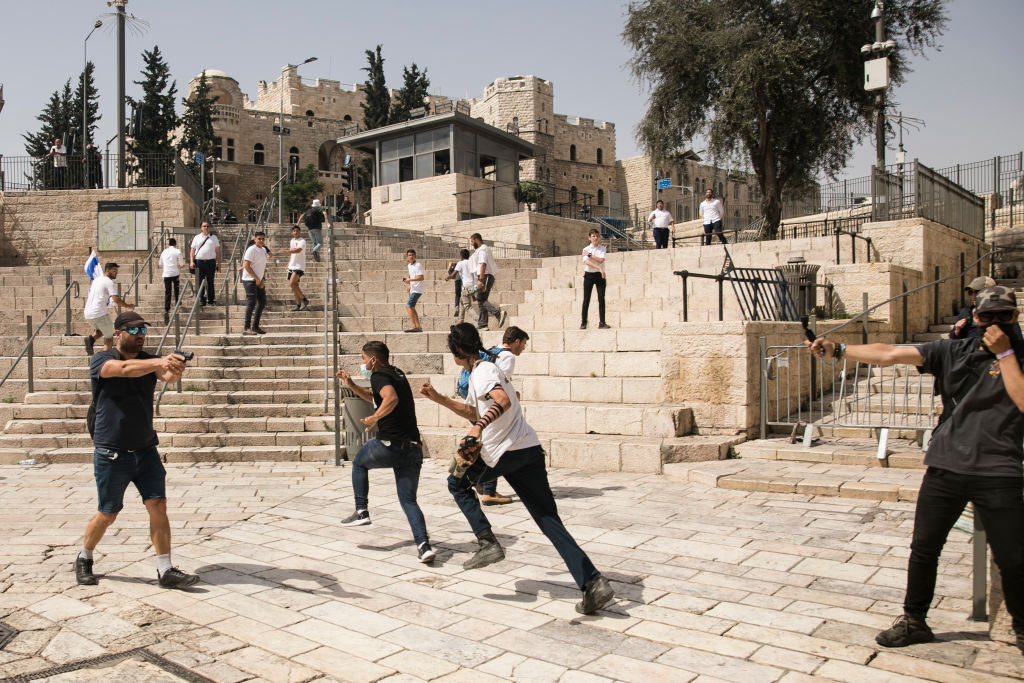 Far right Israeli ultra-nationalists took part in the incendiary "Flag March" through the Muslim parts of the Old City of Jerusalem attacking Palestinians whilst shouting racist and Islamophobic slogans.

Even before the march began on Sunday, hundreds of Israeli settlers stormed al-Aqsa Mosque. They raised the Israeli flag and prayed at the mosque compound — violating a longstanding agreement since 1967 that stipulates only Muslims are allowed to pray at al-Aqsa.

The annual flag march, which is part of what Israel calls "Jerusalem Day", commemorates the occupation of East Jerusalem in 1967 and is a deeply provocative act for Palestinians.  It sees Israeli extremists enter through the highly symbolic Damascus Gate and march through the bustling Muslim area, often attacking and abusing Palestinians along the way.

"The annual Jlm Day Flag March, is always an unabashed hate-fest — tens of thousands of far-right Israelis gather and, along the march route, assault Palestinians, vandalize their property, and sing racist chants, which this year included "Shireen is dead," tweeted Natasha Roth-Rowland, the editor of 972mag.com, which provides independent news and commentary from Palestine and Israel.

During the day, Israelis assaulted Palestinians as they marched through the Muslim quarter chanting "Death to Arabs," "May your village burn" and "Mohammed is dead."

Footage on social media showed Palestinians being attacked and pepper sprayed, including an old woman in her 50s.

As the woman is carried away for treatment, other extremists pepper-spray the Palestinians while another Israeli is seen pointing a gun.

Seems like all the flag-waving settlers are armed with either pepper spray or pistols.pic.twitter.com/vma8Ahi6MY

In the Mosque compound, settlers spent hours performing religious rituals and singing inside the courtyards, but Israeli forces stopped Muslim worshippers from entering the mosque ahead of dawn and noon prayers.

There was more violence in the nearby neighbourhood of Sheikh Jarrah and counter rallies in the occupied West Bank left 100 Palestinians injured by police.

At least 79 Palestinians were injured in Jerusalem, including wounds from rubber-coated steel bullets, beatings and pepper spray, according to the Palestine Red Crescent Society. Another 163 people were wounded in the West Bank, including 20 hit by live bullets.

The decision to let the march go ahead despite the recent wave of violence, which included the killing of Al Jazeera journalist Shireen Abu Aqleh, drew criticism from the West Bank’s Palestinian Authority and neighbouring Jordan, which is custodian of holy Muslim sites in Jerusalem.