Millions stranded by deadly floods in Bangladesh and India 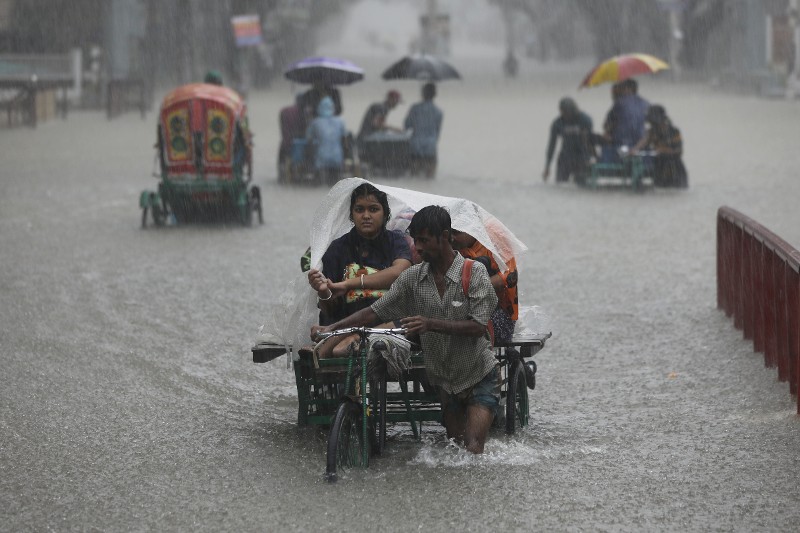 Millions of people have been left stranded after monsoon rains led to widespread flooding in north-eastern Bangladesh and India.

Relentless downpours over the past week caused flooding that has affected nearly 9 million people and killed at least 61.

Forecasts suggest the floods could get worse over the next few days as heavy rains in Bangladesh and in India’s northeast continue.

Monsoons in low-lying Bangladesh are normal but this year places like Sylhet — one of the major cities in Bangladesh — is seeing some of the worst floodings in recent years. Experts say climate change is increasing the frequency and ferocity of floods.

Authorities scrambled to provide drinking water and food to the people marooned with troops deployed to evacuate households cut off from neighbouring communities.

Schools turned into relief shelters to house entire villages inundated in a matter of hours by rivers that suddenly burst their banks.

Many people have been affected by floods for the second time in a month after severe flooding also struck the Sylhet region in mid-May.

People without food and water

"The whole village went under water by early Friday and we all got stranded," Lokman, whose family lives in Companiganj village, told AFP news agency.

"After waiting a whole day on the roof of our home, a neighbour rescued us with a makeshift boat. My mother said she has never seen such floods in her entire life," the 23-year-old added.

Asma Akter, another woman rescued from the rising waters, said her family had not been able to eat for two days.

"The water rose so quickly we couldn't bring any of our things," she said. "And how can you cook anything when everything is underwater?"

Islamic Relief, which has been working in the flood-prone country for over 30 years and has offices in Sylhet, is responding to this latest disaster.

“Many people are out of food and others will run out in the coming days. As markets are flooded and not operating, people have nowhere to buy supplies, so it’s urgent that aid gets through to them," said Shabel Firuz, Islamic Relief’s Head of Asia region.

“People’s houses have been damaged, washed away or completely covered in the flood water. Thousands of people are looking to make their way to flood shelters where they will need a lot of support. Islamic Relief’s office in Sylhet and the homes of some our staff have also been flooded," he added.

At least 16 people have been killed since Thursday in India's remote Meghalaya, the state's chief minister Conrad Sangma wrote on Twitter, after landslides and surging rivers that submerged roads.

Next door in Assam, more than 2.6 million people have been affected by floods after five days of incessant downpours, according to the state's disaster response agency.

Eighteen people had died in flood waters or landslides around the state since Thursday, the agency reported, with nearly 7,500 people rescued on Saturday by mid-afternoon.

Assam chief minister Himanta Biswa Sarma told reporters he had instructed district officials to provide "all necessary help and relief" to those caught in the flooding.