'Never Have I Witnessed': Malcolm X's journey to Makkah and Islam 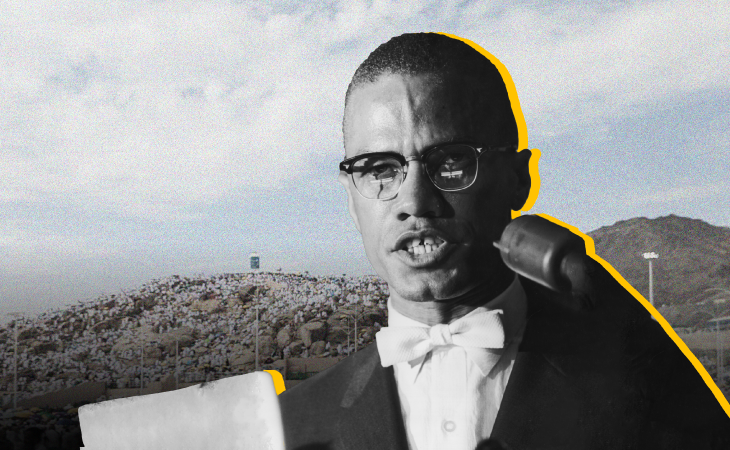 Malcolm X’s pilgrimage to Hajj in April 1964 was a turning point in his life. His famous letter from Makkah to friends in Harlem signified the impact Hajj, and his travels in the Muslim world, had on him and his previous views.

Having left the Nation of Islam, Malcolm X was already on a spiritual journey towards traditional Sunni Islam. In 1964, Malcolm X solidified that journey, going to visit Muslim countries such as Egypt, Lebanon, Nigeria, Ghana, Morocco and Algeria to learn more.

But it’s in Saudi Arabia that he had his most significant life-changing experience after performing Hajj. For Black History Month, here's a chance to read the timeless letter he wrote as Al-Hajj Malik El-Shabazz after completing his pilgrimage.

The letter from Hajj

"In my thirty-nine years on this earth, the Holy City of Mecca had been the first time I had ever stood before the Creator of All and felt like a complete human being," he wrote in this autobiography.

It was after experiencing the brotherhood in Makkah that Malcolm X changed his worldview as he explained in a letter to his in Harlem.

"Never have I witnessed such sincere hospitality and overwhelming spirit of true brotherhood as is practiced by people of all colors and races here in this ancient Holy Land, the home of Abraham, Muhammad and all the other Prophets of the Holy Scriptures. For the past week, I have been utterly speechless and spellbound by the graciousness I see displayed all around me by people of all colors.

"I have been blessed to visit the Holy City of Mecca, I have made my seven circuits around the Ka'ba, led by a young Mutawaf named Muhammad, I drank water from the well of the Zam Zam. I ran seven times back and forth between the hills of Mt. Al-Safa and Al Marwah. I have prayed in the ancient city of Mina, and I have prayed on Mt. Arafat."

"There were tens of thousands of pilgrims, from all over the world. They were of all colors, from blue-eyed blondes to black-skinned Africans. But we were all participating in the same ritual, displaying a spirit of unity and brotherhood that my experiences in America had led me to believe never could exist between the white and non-white."

"America needs to understand Islam, because this is the one religion that erases from its society the race problem. Throughout my travels in the Muslim world, I have met, talked to, and even eaten with people who in America would have been considered white - but the white attitude was removed from their minds by the religion of Islam. I have never before seen sincere and true brotherhood practiced by all colors together, irrespective of their color."

"You may be shocked by these words coming from me. But on this pilgrimage, what I have seen, and experienced, has forced me to rearrange much of my thought-patterns previously held, and to toss aside some of my previous conclusions. This was not too difficult for me. Despite my firm convictions, I have always been a man who tries to face facts, and to accept the reality of life as new experience and new knowledge unfolds it. I have always kept an open mind, which is necessary to the flexibility that must go hand in hand with every form of intelligent search for truth."

"During the past eleven days here in the Muslim world, I have eaten from the same plate, drunk from the same glass, and slept on the same rug - while praying to the same God - with fellow Muslims, whose eyes were the bluest of blue, whose hair was the blondest of blond, and whose skin was the whitest of white. And in the words and in the deeds of the white Muslims, I felt the same sincerity that I felt among the black African Muslims of Nigeria, Sudan and Ghana."

"I could see from this, that perhaps if white Americans could accept the Oneness of God, then perhaps, too, they could accept in reality the Oneness of Man - and cease to measure, and hinder, and harm others in terms of their 'differences' in color."

"With racism plaguing America like an incurable cancer, the so-called 'Christian' white American heart should be more receptive to a proven solution to such a destructive problem. Perhaps it could be in time to save America from imminent disaster - the same destruction brought upon Germany by racism that eventually destroyed the Germans themselves."

"Each hour here in the Holy Land enables me to have greater spiritual insights into what is happening in America between black and white. The American Negro never can be blamed for his racial animosities - he is only reacting to four hundred years of the conscious racism of the American whites. But as racism leads America up the suicide path, I do believe, from the experiences that I have had with them, that the whites of the younger generation, in the colleges and universities, will see the handwriting on the walls and many of them will turn to the spiritual path of truth - the only way left to America to ward off the disaster that racism inevitably must lead to."

"Never have I been so highly honored. Never have I been made to feel more humble and unworthy. Who would believe the blessings that have been heaped upon an American Negro? A few nights ago, a man who would be called in America a white man, a United Nations diplomat, an ambassador, a companion of kings, gave me his hotel suite, his bed. Never would I have even thought of dreaming that I would ever be a recipient of such honors - honors that in America would be bestowed upon a King - not a Negro."

"All praise is due to Allah, the Lord of all the Worlds.

Watch some of his famous speeches in our documentary 'Malcolm X'

30 years on: The demolition of Babri Masjid
Watch series: The Story of Coffee
Video: The Conquest of Makkah