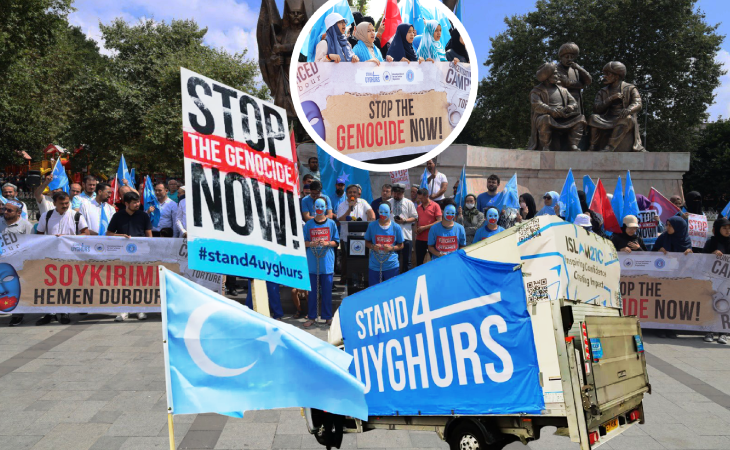 Hundreds of grassroots Muslim organisations rallied outside Chinese embassies and consulates in several cities worldwide on Sunday, in solidarity with Uyghurs and other groups facing genocide in occupied East Turkestan.

Protesters called for the Chinese government to end its religious and cultural persecution of Uyghurs and other ethnic Muslims in the region.

Around 3 million Uyghur Muslims have been detained in internment camps in China.

Last year, the People’s Uyghur Tribunal in London concluded that the Chinese government is committing genocide against Uyghurs.

It found that the Chinese Communist Party (CCP) wanted to partially crush the Uyghur community and its Muslim culture. The investigation said the CCP destroyed 16,000 mosques and punished Uyghurs for attending masjids, praying, wearing headscarves and for having beards.

Salman Butt, the chief editor of Islam21c and one of the coordinators of the Stand4Uyghurs campaign, spoke about the movement during last week's episode of NewsTalk.

"Stand4uyghurs is an international coalition of more than 100+ Muslim organisations and it's growing. It started last year in the UK, with the simple aim of channelling Muslims to effective action towards the Uyghur cause," said Salman.

He added that the plight of the Uyghurs was not as high on the Muslim agenda as it should be.

"Amongst the reasons are a lack of information escaping this tightly controlled region [China], a growing reliance on China by many different countries, especially Muslim majority ones, and a growing sense of powerlessness in terms of China being a superpower," he said.

"This coalition is trying to address these issues. We're doing so by empowering Muslims to see how they can use their voice and see how powerful their voice actually is."

Watch: In this week's NewsTalk, we spoke about the plight of Uyghurs with Islam21C's Dr Salman Butt and Centre for Uyghur Studies' Mehliya Cetinkaya

A look at some of the social media coverage of the demonstrations that were held in several cities across the globe.

Executive Director of @CUyghurstudy, @AHakimIdris’s speech at #Stand4Uyghurs protest in front of the #Chinese Embassy in Washington DC.@Islam21c

.@KhaledBeydoun’s speech at #Stand4Uyghurs protest in front of the #Chinese Embassy in Washington DC.@Islam21c

From the demonstration in Johannesburg! #stand4uyghurs pic.twitter.com/2cvjfnZizn