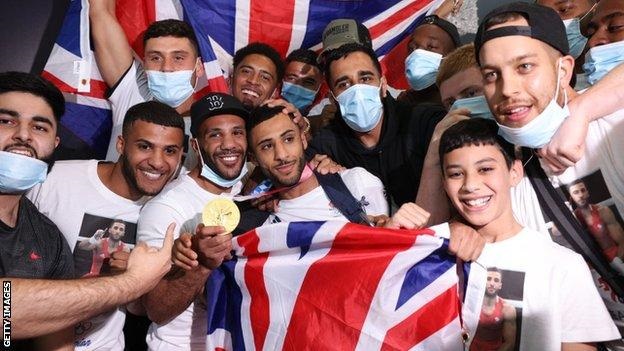 As gold medallist Galal Yafai emerged from his BA008 flight from Tokyo, a large contingent who travelled from Birmingham gave the Olympic champion a proper hero’s welcome.

The 28-year-old former factory worker from Birmingham was met by jubilant friends and family at the airport and received one of the loudest welcomes as relatives and members of his boxing club chanted his name and lifted him onto their shoulders to celebrate his victory in the men’s flyweight competition.

His brothers, who are boxing pros and champs, were amongst those who welcomed him home.

He said: “It was a bit of a shock, obviously everyone greeting me and other athletes, seeing my mum and my brothers, all my friends, it was nice to be welcomed back.”

“These people were there for me when I wasn’t an Olympic champion and they are her for me now that I am,” added Yafai.

Team GB returns home with a total of 65 medals, 22 of them gold, the fourth best performance ever by a British team. The haul matched the number of medals earned at the 2012 Olympics in London and just two short of the record number won at Rio 2016.

She said: “I extend my very best wishes to everyone who has played a part in this extraordinary achievement.”