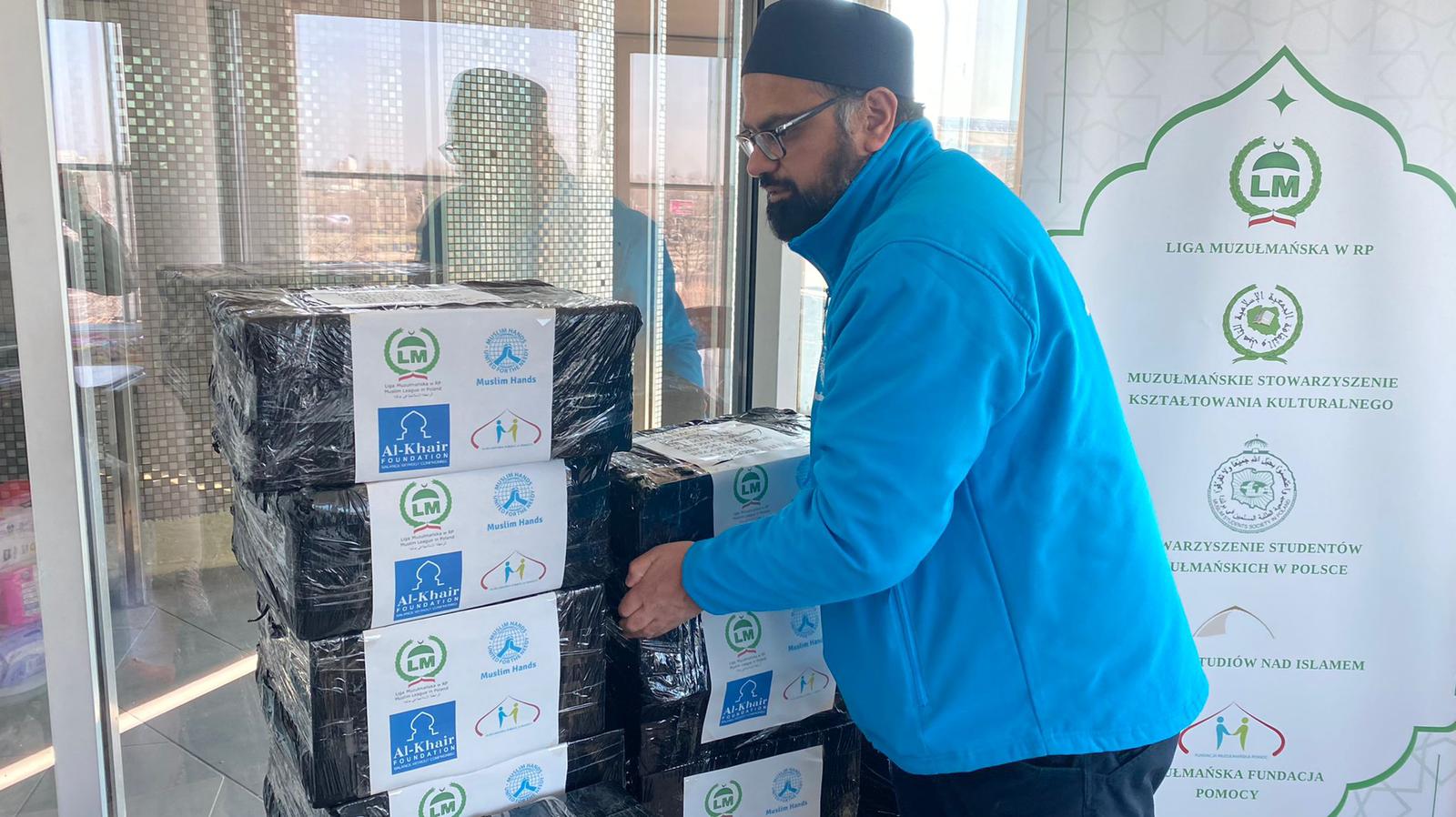 Muslim Hands fundraising director Yasrab Shah writes about what he saw in Poland while distributing aid to refugees, including Muslims, who are fleeing the war in Ukraine.

Once we arrived in Krakow, we were on the move again, travelling to a warehouse that belongs to our partners on the ground in Katowice. Here we started packing the emergency aid that would be distributed across cities in Poland in the week ahead. Each pack contained enough blankets, hygiene items, nappies and food (all halal) to last a family for one month.

We heard multiple stories of families bringing their life savings in Ukrainian currency, only to be told it was worthless once they reached the Polish border. So these basic, yet essential supplies, would make all the difference.

Since February, over 1.7 million Ukrainian refugees have escaped to Poland. Most of them are women and children. They have fled terrifying shelling and explosions, leaving everything behind to survive.

Among the displaced are Muslim Crimean Tatars, foreign workers and students.

When the refugees reach the border they rest for a few hours, before being transported to the main cities of Warsaw, Krakow and Katowice.

They leave behind husbands, fathers, brothers and sons who are caught up in the fighting. And ahead of them lies the mammoth task of rebuilding their lives in a foreign land. At that moment when they have just arrived, they are trying to survive, and it is at this point that the support provided by Muslim Hands’ donors proves to be a lifeline.

During our first day of distributions in Katowice, we saw first-hand how communities from all backgrounds and faiths come together. We joined a united front, ready to serve exhausted and traumatised victims of war in the spirit of the ayah, ‘[O Prophet!] Repel evil in the best manner’[Quran, 23:96].

We saw how supermarkets, concert halls, hotels and empty office buildings opened their doors and transformed into temporary accommodation for the incoming refugees. How they worked with organisations like ours to create a hub where refugees could rest and stock up on necessities.

We saw other acts of kindness when we spoke with some Muslim refugees from Kyrgyzstan, who were workers in Ukraine. Gregory, a local Polish man, had given them a place to stay in a flat he used to rent out to construction workers – at his own expense.

One of the Kyrgyz refugees broke down in tears, moved by the fact that Muslims from many miles away had come to support them in their hour of need.

Others we spoke to echoed the same gratitude to the Polish community but were also afraid that resources and accommodation would become stretched with the ever-growing demand, and they would have no place to go.

The next day we travelled to Warsaw and visited the Central Masjid our partners run. Kasha, one of the coordinators we spoke to, explained that it is very difficult for Muslim refugees coming from Ukraine to find halal food in Poland. The masjid even provides our sisters with new hijabs and abayas, since many of them fled with so little.

Responding to our brothers and sisters

Muslim Hands was born out of our response to a previous European conflict, the devastating war in Bosnia that shook the world to its core.

Fast forward 28 years, and we have come full circle, once again offering a helping hand in line with our Islamic values to those in desperate need. The Messenger of Allah (SAW) said, ‘All of creation are Allah’s dependants, and the most beloved of creation to Allah are those who show kindness to His dependents’ [Baihaqi].

This conflict, like all others, spares no one and the victims that bear the brunt are innocent civilians, predominantly women and children. We must unite, regardless of ethnicity, religious background or gender and do our bit to support those that desperately need it. With Europe facing its largest mass movement of refugees since World War Two, we simply cannot turn a blind eye.

We are grateful for the response we have received from our generous supporters from the UK and abroad. Our emergency food packs are making a real difference.

The Polish authorities reach out to us to respond to the specific needs of Muslim refugees and we hope to continue supporting those impacted by the Ukraine crisis this Ramadan.

May Allah (SWT) be pleased with us and our supporters and allow us to be the instruments of His compassion by serving all victims of war. Amin.

You can donate to Muslim hands by visiting muslimhands.org.uk