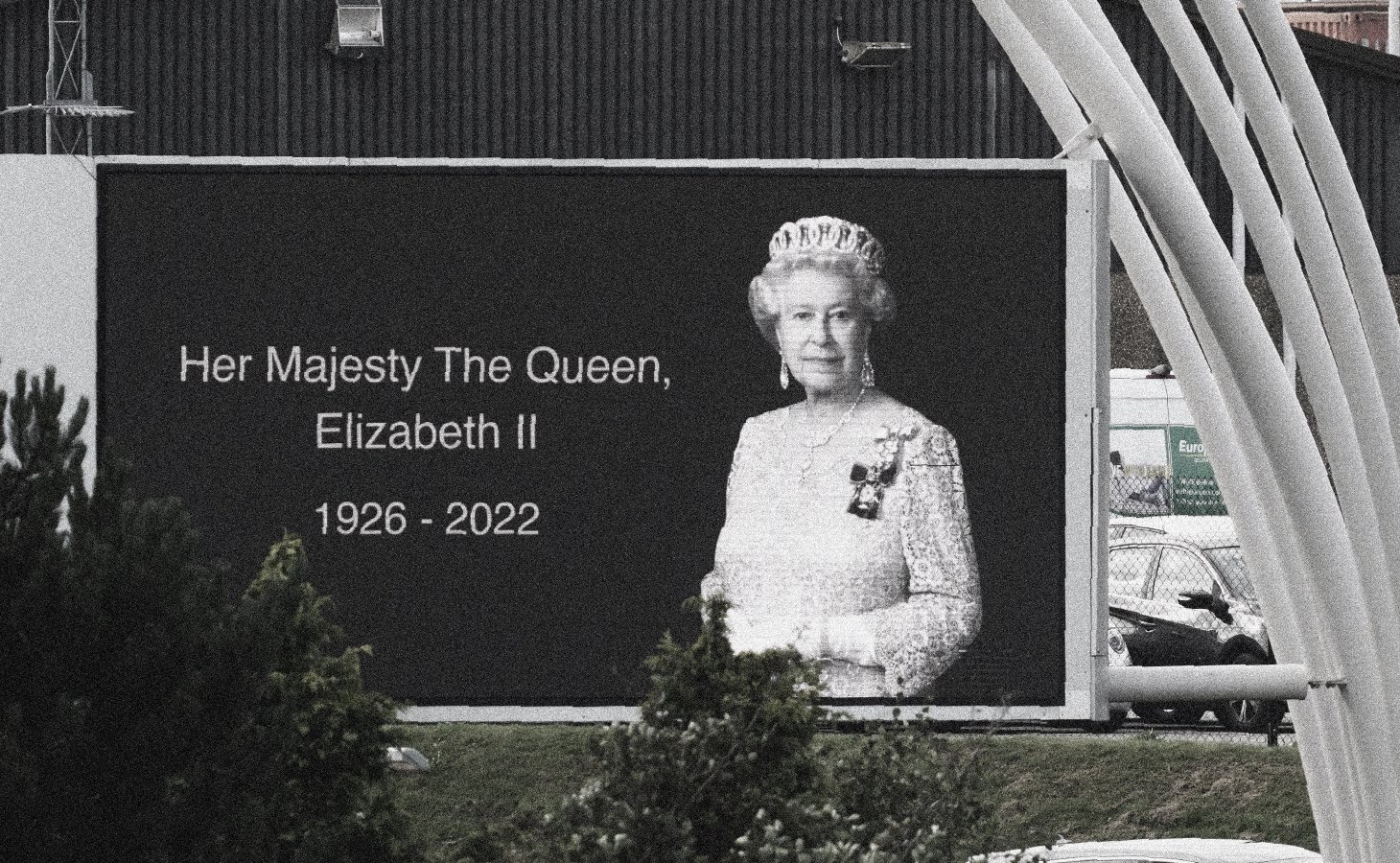 Hamza Ali Shah looks at the weeks since the death of Queen Elizabeth II and wonders why dissenting voices were side-lined and silenced.

The death of Queen Elizabeth II provoked considerable questions – both contemporary and historical – even if inadvertently. Yet amid the – often enforced – mourning of the UK’s longest serving monarch, those questions were suppressed.

That Thursday morning before news emerged of the Queen’s death, a packed parliament was debating the economic turbulence staring Britain in the face with skyrocketing energy bills at the heart of it. Newly elected prime minister Liz Truss set out an energy costs package for homes and businesses that would mitigate the looming catastrophe.

By mid-afternoon, the crisis that’s already causing people to skip meals to cope with rising costs, was ostensibly no longer deemed a critical matter, as news trickled through of the Queen’s ill health.  BBC News presenter Clive Myrie suggested the energy bills predicament was ‘of course insignificant now given the gravity of the situation we seem to be experiencing with Her Majesty.’

Ordinary people of the Queen’s age face the choice of heating or eating – which many fear will lead to death this winter. But the news of the Queen’s death and subsequent events confirmed their relegated status in the hierarchy of human life. Their struggles became secondary to honouring the member of a family much more sheltered and privileged.

Indeed, Charles is set to inherit his late mother’s Duchy of Lancaster estate – worth almost £700million – but he’s protected from paying tax on it by UK law. The usual levy for British citizens is approximately 40% but a rule introduced in 1993 means Charles will be exempt as he inherits the fortune. Then prime minister John Major justified it, stating the circumstances of a hereditary monarchy were ‘unique’ and the lack of inheritance was ‘the overwhelming wish of people in this country’. As with most matters pertaining to the monarchy, the public did not actually have a say. All signs therefore point to a different set of rules according to wealth and status.

The emerging eye-watering cost of the funeral – an estimated $9milllion – coincided with sections of the British commentariat filling column inches suggesting the public learn the ‘satisfaction of thrift’ as the cost-of-living crisis bites. A curious position perhaps, but one that chimes entirely with the prevailing sentiment from a political class who have perpetually insisted on the need for ‘fiscal responsibility’.

Still, given the Queen spent 70 years on the throne as Britain’s longest serving monarch, the pomp and ceremony was understandable as the nation confronted her loss. Columnists heaped praise on the ‘fully functional democracy’ that Britain has become under the monarchy. Although a cursory glance at proceedings over the last fortnight might indicate otherwise. As Charles accession began and crowds gathered across the country, a string of anti-royal protest arrests were made.

One person was arrested in Oxford for shouting ‘Who elected him?’, referring to King Charles, and another in Edinburgh for holding a sign saying ‘abolish monarchy’. A barrister revealed he was even threatened with arrest whilst holding up a blank white paper, if he proceeded to write ‘Not my King’ on it.

The blank paper is particularly symbolic; in March this year, Russian police arrested a demonstrator for protesting the Russian aggression against Ukraine by holding up a blank sign. Activists and civil liberties groups raised the alarm over the excessively aggressive policing of republican protestors whilst a Labour MP cited the elephant in the room, drawing comparisons to Russia’s routine crackdown on dissent: ‘If this was happening in Russia, the Government would be denouncing it on the international stage.’ The parallels were striking, and within the context of an increasing crackdown on civil liberties, it calls into the question the path that Britain, self-professed beacon of democracy, is really on.

It was not just protesters who expressed their objection to the monarchy. TalkSport Football pundit and former England international Trevor Sinclair took to Twitter stressing that those from minority communities did not all share the glowing recollection of the Queen, citing the often-unrestrained racism that was a mainstay in Elizabethan Britain. But an example was made of Mr Sinclair as he was taken off air pending an investigation.

Even reporting on the royal family in a manner that did not include overzealously lionising them was seemingly problematic, as the New York Times found out. Their coverage of the Queen’s death elicited a torrent of anger from much of Britain’s media class. One NYT article was titled ‘The queen’s funeral will be paid for by British taxpayers.’ The Twitter caption for the article noted that the funeral will be paid for by ‘British taxpayers as they deal with soaring energy prices and high inflation.’

The New York Times has won 130 Pulitzer Prizes for its accomplished journalism. But no awards were going to be handed out for that particular newsgathering, for they merely pointed out a fact. One that was ostensibly too bitter a pill to swallow. ‘Your journalists are a global embarrassment’, retorted a Guido Fawkes journalist to the tweet. Broadcaster Andrew Neil went on social media to berate the New York Times’ ‘anti-British propaganda’, meanwhile the Spectator took aim at the apparent ‘near pathological loathing for Britain’ that the daily newspaper possesses, a syndrome of its ‘royal derangement syndrome’.

Read: Quotes that capture his admiration for Islam and Muslims

So, the message seems clear; only a rosy perspective of the monarchy is allowed.

However, that is an imprecise understanding of the monarchy and its history. On the rare occasion there has been some exploration of its past, the word ‘complicated’ has often been employed, which in itself is a grave understatement. Britain’s colonial history is bloody and brutal. The British Empire’s violence, theft and repression is well documented. And though much of it was committed when Elizabeth was not Queen, atrocities did continue during her reign, despite in 1952 inheriting a Britain with a weakened grip on power grappling with anti-colonial rebellions. Between 1952 and 1963, British forces crushed the Mau Mau rebellion in Kenya, forcing between 160,000 and 320,000 Kenyans into detention camps and subjecting them to vicious, systemised torture.

Nobody is saying the Queen knew anything about the monstrosities committed in Britain’s name. But what we do know is that thousands of documents detailing the extent of the reprehensible crimes perpetrated in the final years of the British empire were systematically destroyed beyond the reach of historians and the public. We do know that the Queen was urged to apologise and make reparations to Jamaica for the Royal Family’s role in the transatlantic slave trade.

That apace with the revelation that Buckingham Palace banned ‘coloured immigrants or foreigners’ from jobs in the royal household until at least the 1960s, suggests that the oppression and unpalatable treatment of communities that characterised the monarchy was not confined to Britain’s endeavours abroad.

None of this is to discount the agony and sorrow the Queen’s death has had on the nation and her family in particular. Rather it is to hope that as one chapter closes, the flaws that often represented the system the monarchy functioned in are acknowledged and rectified as a new chapter begins.