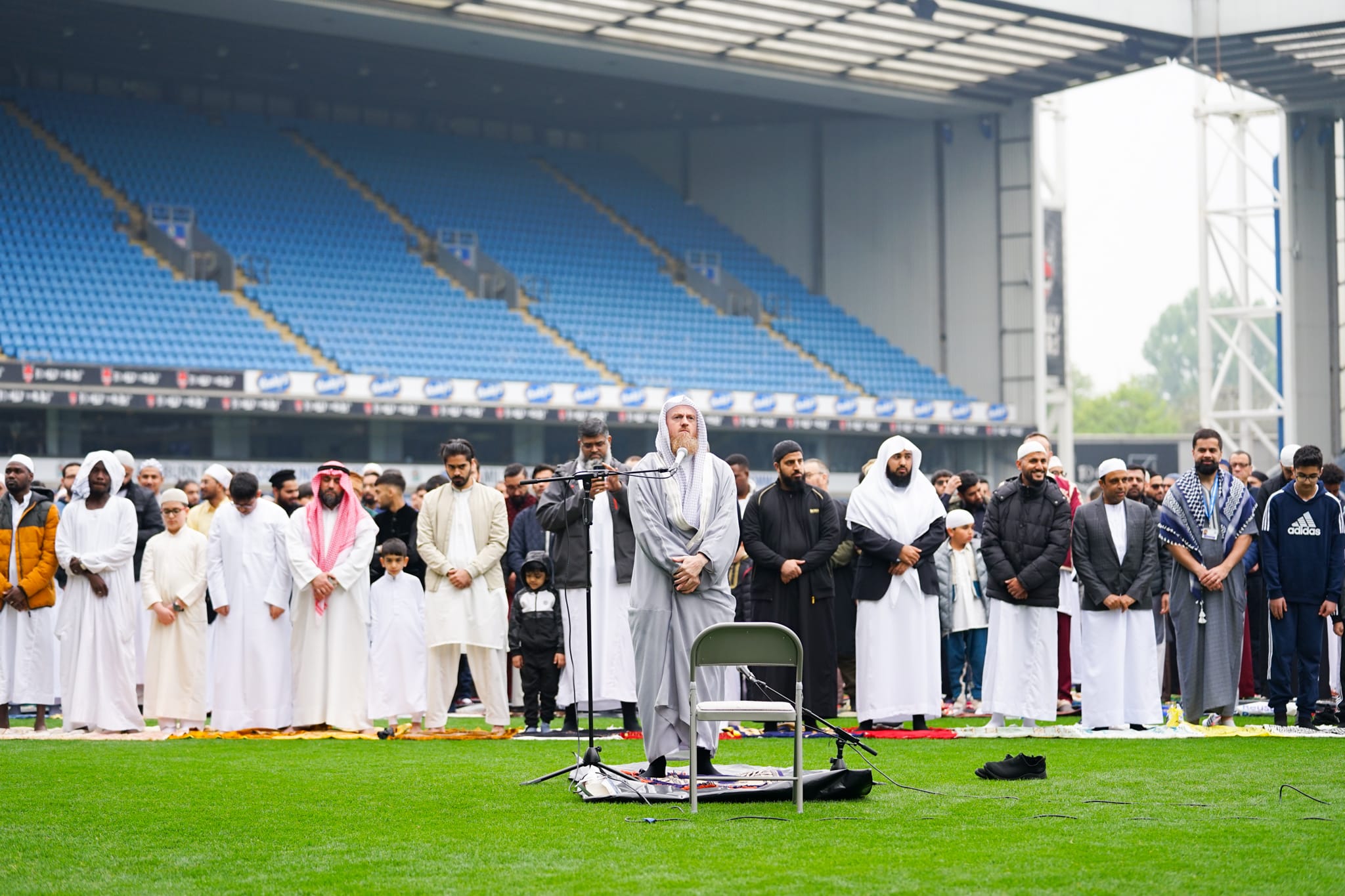 History was made on Eid al-Fitr when Blackburn Rovers became the first British club to host Eid salat on the pitch at their Ewood Park stadium.

Local football and cricket clubs, as well as parks, are regularly used as Eid Gahs - an outdoor public setting for the salat - but the former Premier League champions saw over 3,000 worshippers attending prayers on Monday.

Where Rovers legends such as Alan Shearer, Tim Sherwood and David Dunn used to play, men, women and children were given the chance to pray on Eid morning, with complimentary buses also available from certain points in the town.

The idea was the brainchild of Blackburn’s Integration and Business Development manager Yasir Sufi, whose role with the club is to engage with the town’s south Asian community.

“There is a local organisation called Eid in the Park which usually host the event at Corporation Park in Blackburn, they have been doing that for six years,” Sufi explains to Islam Channel. “For the past four years we have been sponsoring and supporting them but this year we have the opportunity to do it on the pitch at Ewood Park.

“The chief executive, Steve Waggott, signs it off and with the board they are fully supportive of everything we do.

“In Ramadan, we had 16 members of staff fasting for a day and we then did Iftar together. We gave out to the local community via the mosques and through the charity Benefit Mankind, which does a lot of work in the UK and abroad for Muslims.

“On the weekend after Eid we will have a funfair but for the Eid salat itself we wanted to keep it simple where you come and pray, listen to the khutbah and gave out refreshments such as traditional milk and biscuits.”

There were no objections from the local community to the Eid Gah and renowned Sheikh Wasim Kempson led the salat.

Rovers CEO Steve Waggott said: “I think this is a hugely significant moment for football. Not just for Blackburn Rovers, but for football in general.

“We’re the first club to ever host the Eid prayer on the pitch, which is great, but it follows on from the last few years of having a prayer room installed, having alcohol-free bars, having Halal food, launching an Ewood Express service to bring young people and families to the stadium … all the things we have to do to attract a new wave of supporters from our South Asian community."

Ordinarily, on a matchday, Muslim supporters wouldn’t feel uncomfortable or uneasy in going to watch Rovers, with facilities available from a religious perspective such as a purpose-built prayer room attended by around 50 fans including women, who have a separate room of their own.

The prayer room is used throughout the year by match stewards, club staff and any visitors that come to the club.

“The feedback has been really positive. We openly advertise a prayer room and our social media channels are quite active in showing that,” said Sufi.

Halal food is also available in the concourses including chicken tikka biryani from a local caterer and there is also an alcohol-free stand, which would typically be an important aspect for Muslims.

Such has been the club’s drive towards attracting supporters from minority communities, their work was recognised by the English Football League, winning the Diversity Club of the Year award.

“Blackburn were the first club to employ someone full-time to do something about the demographic of the town,” said Sufi, who started in his role in 2020. “Other clubs, including in Lancashire, had the same problems too but I was brought in to specifically concentrate on that role.

“We started doing initiatives and then other clubs like Preston looked at it and thought, ‘we have to buck our ideas up’. There is no rivalry as such but we are setting the standard and leading the way.

“We want to drive forward the fans of the future and show to the younger generation that this football club is open to them. Our big focus is making the stadium as welcoming as possible. We can use events like Eid at Ewood and hopefully make it a regular thing.”‍