“Boxing brings me closer to Allah”: How Islam is helping hijabi boxer Tina Rahimi be a big hit 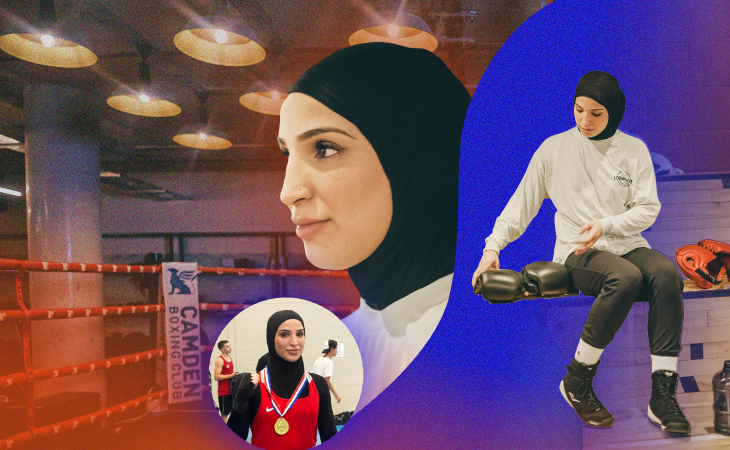 ‍Tina Rahimi, the Aussie Muslim hijab-wearing boxer, sat down with Islam Channel and talked about boxing, her upbringing and Islam.

When Tina Rahimi registered for a boxercise class to get fitter in 2017, she didn't envisage that five years later she would win a Commonwealth Games bronze medal in boxing.

Tina's been making the news since becoming Australia’s first-ever female Muslim (and hijabi!) pugilist to compete at the Games in Birmingham. Her meteoric rise has been documented by the likes of the BBC, Sydney Morning Herald and the official Olympics website.

And it all began when the 26-year-old and a friend turned up for a women-only boxing class at a local gym in Sydney five years ago. It didn’t take her long to realise that she had a knack for the sport.

"When we did the more technical sessions, I just remember, it just felt good,” Tina tells Islam Channel in an exclusive interview. “I was catching on really quickly."

Raised by her father from the age of seven, along with her two sisters, her upbringing wasn’t without difficulty: "My mum wasn't really in the picture, at that time."

And the sisters found the expectations of their father quite 'tough'.

"He expected us to know how to cook, how to clean, do the washing, do the bed. So, it was like a lot of expectations," says Tina.

"It was pretty tough not to have a mum around in the house. You don't hear a lot of people raised by just their dads.

Her mom is back "in the picture" now and has been to a few of Tina's fights: "My mom is amazing. Like now we speak to her and she's really supportive when it comes to the boxing and she just gets scared obviously."

Tina's love of sport and fitness comes from her father — a wrestler who came to this country at the age of 17 from Iran: “He's been Australian champion a few times. This is all back in the 80s and 90s.”

Though he wanted the girls to have academic careers, he was keen on fitness and pushed them into playing different sports as a hobby, like swimming and football.

Boxing wasn’t on anyone’s radar, until Tina took those classes later in life. In fact, before that, she didn’t know much about the sport apart from a few boxing celebrities like Muhammad Ali and Mike Tyson.  She hadn't even watched the Rocky films until two years ago.

Now Tina is "obsessed" with boxing. It's something she wakes up wanting to "do every single day."

That even means giving up her successful career as a makeup artist to pursue boxing full-time: "I just had to let go of that to dedicate my time to boxing."

Tina will stay in amateur boxing and is gunning for gold in next year's World Championships and then the Olympics in 2024.

Being an aspiring Olympic boxer means training, competing regularly, going to various events and travelling — and all that doesn't leave much time for socialising:

"If I miss out on training, I feel like I've missed out on a day of improving."

Even during Ramadan, she was committed to doing the long hours. "I was just training," she says. "We'll eat at night, like Iftar time, and then just train the whole night and sleep, and then fast."

To give an insight into her commitment, Tina found out details about her opponent's training regime on social media after losing to her. She went on beat the opponent in a re-match.

"I was stalking this girl and making sure I was healthy and staying on top of my diet," says Tina.

"Like I analyse the fight, had a look at it with my coach and then just see what we can work on."

"I just have full faith in God"

Islam plays a significant role in her life. Before each fight, Tina prays for herself and her opponents.

"Before every single round, I always say like Bismillah, Allahu Akbar; I always make a lot of dua," she says.

"It's good in a way that I do boxing because I actually feel like, as weird as it sounds, it brings me closer to God.

“I'll do extra, just so God can answer my prayers. I'll wake up for thajjud and then I'll do my morning (fajr) prayer, and then I'll go back to sleep.

"I just have full faith in God. And I just know whatever's meant to be for me, will be."

Tina knows there's more to life than boxing. She gives an example of being at the pinnacle of her career - when she won the Australian nationals – and still feeling an emptiness inside. She realised you could have everything you wished for but without Allah it means nothing.

"One quote that really inspired me from Muhammad Ali was, ‘I conquered the world and it didn't bring me true happiness. The only true satisfaction comes from honouring and worshipping Allah.’"

"I remember when I first put the hijab on, and I just felt like a target," she says.

A guy once followed her off the bus, hurling abuse and calling her ‘ISIS’: "I was just bawling my eyes out and I felt like that really traumatised me. Everywhere I'd go, people were looking at me and I just felt different.

But boxing has given her the confidence to be herself, even though initially she felt nervous as a hijabi boxer.

"I just felt like people were going to look at me and just judge me," she says. "But once I actually stepped in the ring, I wasn't nervous anymore. And I just felt amazing."

Now she doesn't care what people think of her: "I'm just trying to be me. And this is who I am; I'm required to wear the hijab and I wear it with pride."

"It's definitely taught me independence. And, it's showed me how to go through tough times."

The tough times she talks about is the breakup of her marriage.

Tina met her husband when they were both studying. They married young when she was just 19: "I just wanted to do everything right in terms of religion. I didn't want to be in a relationship that's not in an Islamic way."

After nearly seven years of marriage, the pair divorced at the beginning of this year.

"We're just different people. We got married when we were younger. And we did everything the right way," she says.

"It was a mutual agreement with me and my husband, [but] it was still tough because we had almost seven years together."

She acknowledges that boxing may have played some part in her marriage breakdown but thinks it was more down to them growing apart.

"Maybe I wasn't around as often," says Tina. "I wasn't travelling that much but I was always at the gym, and maybe it grew us apart. But we were just two different people. As we got older, we realised that and we just decided to split ways."

"It's great for me to inspire other females”

Tina says the Muslim community has been very supportive of her and proud of her for shattering stereotypes. But she also gets disapproving comments about why she shouldn't be boxing as a Muslim woman.

"Like I said, I'm just doing me… you can't make everyone happy. You just got to do what works for you."

Both her parents are supportive of the career choice and her sisters are her biggest cheerleaders: "They've been to every single one of my fights — and they're the loudest ones!"

Tina says the recent media attention in her story has been "overwhelming” and she sees the pros and cons of being seen as a ‘role model.’

"I'm not perfect. And I might make mistakes where people don't think that's like an ideal Islamic thing to do. So, it's hard when people call me a role model.

"But yeah, it's great for me to inspire other females and for them to look at me and think that anything is possible because look at how I dress, and fighting in the hijab — and it's amazing for me to give that inspiration."

She hopes the fame and exposure she gets will help change public perception of Muslim women in general, particularly hijab-wearing women.

"I'm hoping that people can see that Muslim women are just normal people," she says.

"Just because we wear the hijab, and dress like this, you know we're not oppressed. These are just things people think about us because they might not know many Muslim females

“I guess people can look at my story and look at me and know that I'm happy and I wear the hijab with pride. And this is something that I want to do and what I've chosen to do.

“I hope that message can go all around the world."