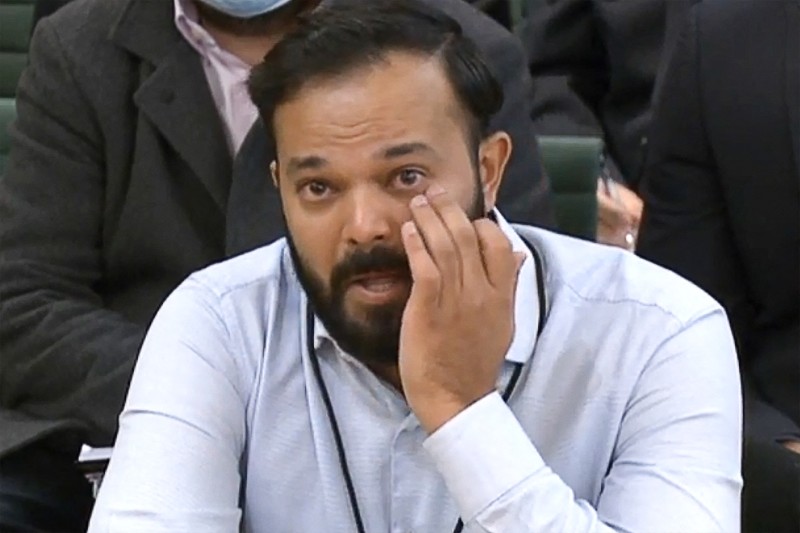 Azeem Rafiq batted back tears as he re-lived some of the racism and Islamophobia he faced as a player, including how he was forced to drink wine at the age of 15.

Speaking to the Digital, Culture, Media & Sport committee, the former cricketer gave shocking details about the racist abuse he suffered at Yorkshire and his subsequent fight to get the club to address the issues.

Rafiq said he and other Asian players experienced racism “pretty early on.”

“There were comments such as ‘you’ll sit over there near the toilets’, ‘elephant washers’. The word P*** was used constantly. And there just seemed to be an acceptance in the institution from the leaders and no one ever stamped it out,” said Rafiq.

He revealed how a player who played for Yorkshire and Hampshire was involved in forcing him to drink alcohol. "My first incident of drinking, I was 15, I got pinned down at my local cricket club and had red wine poured down my throat," said Rafiq.

When asked about harassment over prayers, Rafiq said he knows other players have had issues. He also added that one player at Yorkshire, whenever he made a mistake whilst fasting, fellow players and coaches would blame him for fasting.


More players have come out in recent weeks to relay stories about racist and Islamophobic abuse in cricket.

Yesterday, England bowler Adil Rashid became the third person to say that he heard Michael Vaughan make derogatory comments to a group of Asian cricketers. Vaughan denies allegations that he said there are 'too many of you lot' to the Asian players.

Meanwhile, former Essex cricketer Zoheb Sharif said he was nicknamed "the bomber" and "curry muncher" throughout his time at the county. He alleges that he was forced to pray in his car, as he was refused to use a corner at the club.

Maurice Chambers, a Jamaican fast bowler, also said racist bullying experienced at Essex made him cry after matches. On one occasion, a colleague called him a “f***ing monkey.”

Here are some of the other things Rafiq said in his testimony to the MPs: