Exclusive: Cricketer Adil Rashid tells us about his Hajj journey 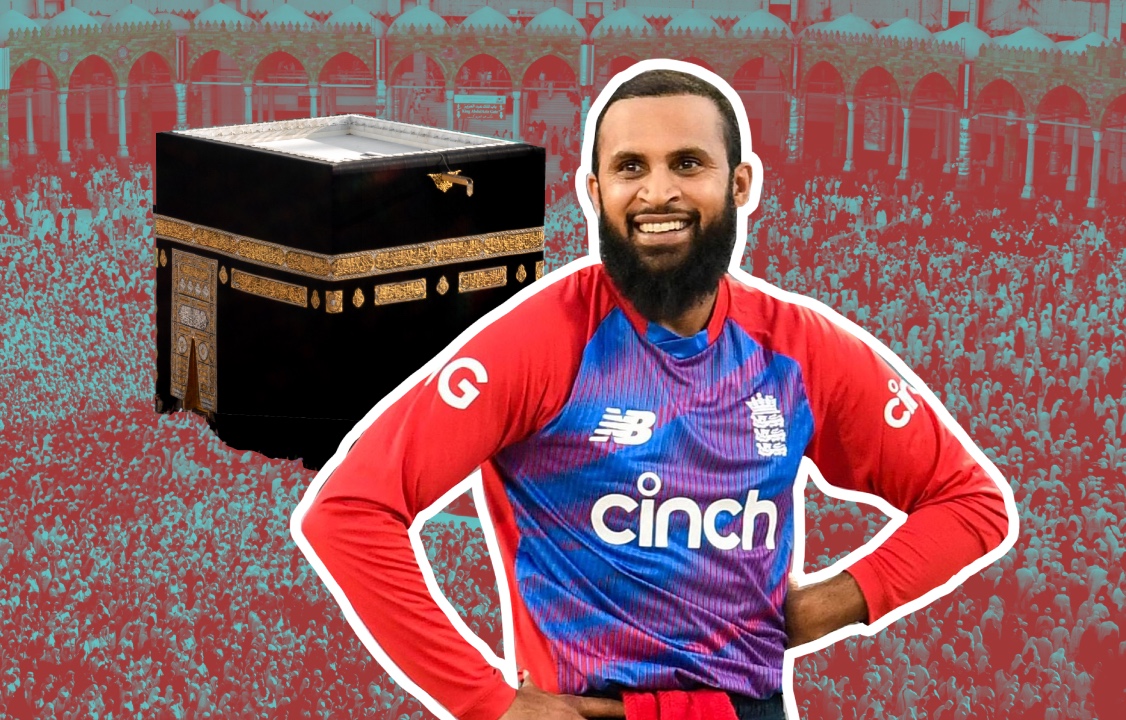 ‍England cricket star Adil Rashid missed the recent series against India as he was granted leave to perform Hajj. He tells Shamoon Hafez and Islam Channel about the processes, rituals and emotions of this once-in-a-lifetime journey.

Hajj is one of the five pillars of Islam, which all adult Muslims must complete at least once in their life if they have the means and capacity to do so.

This year, England and Yorkshire leg-spinner Rashid was one of the fortunate ones to make the pilgrimage to Saudi Arabia.

The first Hajj open to non-citizens since the coronavirus pandemic, Rashid was part of the one million worshippers in attendance, having booked through the new Motawif system.

“It has been on my mind for a little while, I haven’t had the time and haven’t gone through with it,” Rashid tells Islam Channel.

"You have to make the time for Hajj, when you are able to physically, mentally and have the means to do so. I was too stuck in playing cricket and Hajj always took place during the season, that is still no excuse though.

"As a Muslim, if you are able to, you should go even if you have work commitments. You need to make it happen around that. Thankfully the England and Wales Cricket Board (ECB) and Yorkshire were good to me.

“It is easy to say I will do it once my cricket career is over but we don’t know what will happen in the future because there are no guarantees for tomorrow. This year I just felt I wanted to get it done now, while I am capable, well and healthy.”

‘In ihram, everyone is equal’

But there is no distinguishing between the esteemed and the ordinary during Hajj.

He says: “You learn patience, gratitude and unity during Hajj. You learn about the spiritual side too in following the footsteps of Prophet Ibrahim (AS) and as a Muslim, it is our belief and why we do Hajj. The main thing is that you have to be very patient out there, there are a million people doing the same thing as you.

“I got recognised there especially with the Pakistani, Indian, Sri Lankan and Bangladeshi people who love their cricket but in ihram, which is just two pieces of white cloth, there is no identifying between the rich and the poor, those of high or low status, everyone is equal. You have to have the mindset of being equal and think about what your purpose of being there is.

“It was a lot more difficult than I expected, especially with the lack of sleep and then sometimes the food is not what you are used to. You are on your feet a lot and the heat is 45C, there are lots of people walking and there is traffic too.

“It is about showing patience and not getting worked up. I found it quite challenging because I was walking from place to place. It catches up with you emotionally and physically. When you are in the moment though, you don’t really think about it, you put your head down and go with the flow."

The five days of Hajj

Here, Rashid runs through the rituals he undertook during the five days and what they meant to him.

First day: “Everyone comes together in Mina, where the tents are, and you settle in. You pray on your own but then get to know people too. That builds companionship because they could be with you on that journey for the next couple of weeks."

Second day: “This is the ‘day of Hajj’, when you go to the field of Arafat to ask for forgiveness. You make dua for your friends, family and the ummah. You ask for a better life and anything else that comes into your mind. We as Muslims believe Allah answers our duas on this day.

“You then go to Muzdalifa to spend the night. When you are there, the realisation comes that other Prophets such as Ibrahim and Muhammad (SAW) did the same. How they laid down on that very ground and looked at the stars above, we are doing the same. You definitely feel something spiritually and gain a lot of strength from that. You then pick up the pebbles for pelting of the shaytaan.”

Third day: “You return to Mina camp after Fajr prayer and on this day is the first pelting of the shaytaan, which is in the form of a wall. You wait for your Qurbani before shaving your head. You go to Makkah for the rituals before returning to Mina camp."

Fourth and fifth days: “I stayed in Mina until the end of Hajj to make the most of the trip and get to know other people. You do the pelting of two more walls on these days."

Rashid explains the spiritual benefit of completing Hajj and the hope that it changes a person for the better.

He says: "There is a lot going on but it is something I am happy I did in full. It is a life changing experience and Inshallah something that will have an impact on my life outside of cricket in terms of how I am as a person, how I interact with others and how I see things. There will always be ups and downs but after completing Hajj, I hope to have taqwa in my mind.

“After coming back, we believe all our previous sins are forgiven and are starting off afresh. That means when you return home, you change or improve your ways. You give up certain bad traits and if this happens, then you know your Hajj has been accepted."

‘Allah was with us’

Meanwhile with England, Rashid has seen the retirement from the one-day team of captain and close friend Eoin Morgan, as well as influential all-rounder Ben Stokes.

“I am very close with Morgan," he says. "We made our England debuts together in 2009 and he became my captain when I returned to the side in 2015. We have a really good friendship, understanding and a bond and trust with each other. He is one of those people who I would go to on a regular basis to speak to and get advice and feedback.

“I asked him about going for Hajj, ‘Morgs, what you reckon?’ Without hesitation he told me to go. He is a family man and knows about morals and he respects people’s religions. He did not question it and gave me the backing to do what I had to do, then come back and play my cricket."

And there is one moment with Morgan that Rashid says will live with him forever.

Speaking after the 2019 World Cup win at Lord's, Morgan recalled a chat with Rashid in which he said that England would win the Super Over because "Allah was with us".

“That will always stick with me," said Rashid. "It was a great moment and it was surprising for him to remember that. What he said touched a lot of people’s hearts."

Asked if he himself has any thoughts of retiring, the 34-year-old said: “I want to take it a day at a time and see what the future has in store for me.

"I can easily say I want to play until I am 44 but Allah is the best of planners, whatever happens will be down to him.

“Ideally, I want to play as much as possible but I will have to accept whenever my time is up. I will look back on it and think I have had an amazing career, Alhamdulillah.

"Hopefully that talk is still 10 years or so away!"