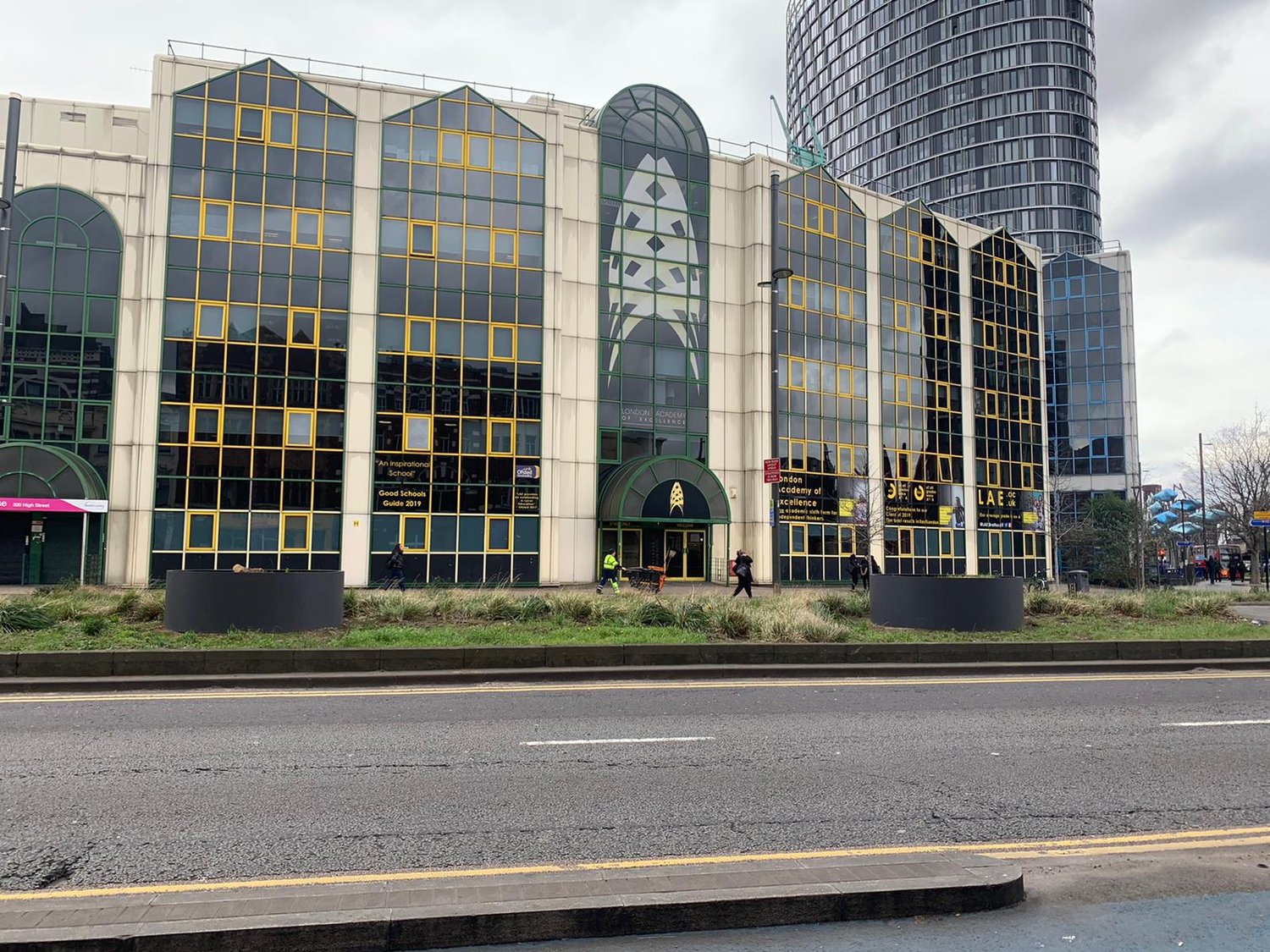 A group of former students from the London Academy of Excellence (LAE) in Stratford have accused the sixth form of 'structural Islamophobia,' claims which the school denies.

On the website LAE-Exposed, the ex-students list a timeline of episodes they allege to have happened at the sixth form, including testimonies from former students about some of their experiences.

The former students accuse LAE of limiting "the right of Muslims to freely observe their religious obligations" and of exhibiting "invasive and harassing behaviour towards Muslim students." In a statement, LAE denied accusations of Islamophobia.

The main allegation centres around the lack of prayer facility on site since 2015, which the group says led to students praying in unoccupied rooms in secret, praying on the pavement in the rain and on stairwells.

🚨Shocking footage of LAE students praying in the rain! 🚨

Students are not allowed to pray onsite at the London Academy of Excellence and so are forced to pray in these appauling conditions. This is completely unacceptable.

Some of the allegations are historical, including claims about girls being questioned about wearing hijab and students allegedly being "mocked and asked “When are you going to Syria?” or “When will you become a jihadi bride?”

"There are countless more examples of hostility, humiliation and bigotry of this kind towards Muslim students at LAE," said the LAE-Exposed website.

Newham councillor Mariam Dawood, who represents Manor Park, tweeted that she would look into the allegations: "Disturbing allegations. Islamophobia, misogyny, violations of human rights. Cllr Salim Patel and I are in touch with residents affected and relevant bodies to take this forward."

Disturbing allegations. Islamophobia, misogyny, violations of human rights. Cllr Salim Patel and I are in touch with residents affected and relevant bodies to take this forward https://t.co/WmKxOvybKz

In a statement, LAE said: "We are aware of an online campaign alleging that LAE is an institutionally Islamophobic institution. We refute this allegation as without foundation and regard it as malicious."

The school said the core of the allegations are related to facilities to pray and pointed out that it is providing provisions for students to pray, including by hiring a hall in another facility away from the school as it lacks space.

FOSIS, the umbrella body of Islamic Societies in the UK, told Islam Channel that it has been investigating and collecting testimonials from staff, current students and alumni about LAE. Some of those alumni are part of the LAE-Exposed campaign.

Samiul Hussain, the vice president of further education at FOSIS, said the current provisions are "not enough because there is a clear two-tier treatment of Muslim students at play."

"Currently, many clubs and activities are being held onsite within their respective classrooms. However, for prayer no classroom is provided citing inexcusable reasons such as 'being an old office building."

He said the current room being hired out is only available for 1 hour: "It does not cater for the Asr and Maghrib prayers, especially during the winter. The terms of use document has also prohibited 'led prayers', meaning no Muslim student is allowed to pray in congregation which is a pivotal tenant of their faith."

FOSIS said it got involved in the case after it was approached by the students.

"We are ready to participate in an independent investigation to share our findings with the panel and have started holding conversations with reputable academics, local councillors and parent group leaders from the Newham Borough," added Samiul.

Since the story broke, on social media former students have come forward about their alleged experiences.

How is LAE refusing to acknowledge the trauma inflicted upon the Alumni, whilst continuing to do the very things they did to us? I was made to feel like a burden for wanting to pray, alienated, cornered into chosing between praying or punished for praying, treated as a suspect. https://t.co/1uPXRsxyoj

2) I used to pray in the main hall and in either of two separate rooms on the second floor which used to be used for study and social purposes by students during break times. This space was taken away during 2014 when a new SLT was formed. #LAEExposed

My sister attended this school and during her time there, I’ve heard unbelievable stories.

I literally used feel like these students were like the early Sahabas, fighting for their deen in the midst of the atrocities posed by the Quraysh.

May Allah grant them justice! https://t.co/mul6ARqoA0

The complaints from students go as far back as 2014 when the school "abruptly banned Jumu’ah (Friday prayer) on school premises", according to the statement from LAE-Exposed.

"This was the start of a series of incidents that limited the right of Muslims to freely observe their religious obligations."

"In doing so, the school has found itself foul of section 10 of the Equality Act 2010 as religion is a ”protected” characteristic. The disregard for Muslim students also contradicts the LAE’s own values of inclusivity and respect, which the school prides itself on," it added.

The Department for Education’s advice for school leaders, school staff, governing bodies and local authorities is to meet the needs of people who have a particular characteristic, for example enabling Muslim pupils to pray at prescribed times.

"We, as a society, have recognised the value of different faiths and ways of life and do our best to accommodate them. No such accommodation has been made at LAE, any possibility of it has been actively stifled," added the statement.

In its statement, LAE said it has operated since inception in a converted office building that lacks some of the facilities found in other schools or colleges.

"There are no on-site prayer facilities for students of any faith. However, the school fully recognises the importance of prayer to many of our students and has hired space a few minutes walk from the main school entrance."

The statement said this space is offered to students but students can also access other local prayer facilities.

"In addition, to accommodate Muslim students and staff who wish to pray, the school operates a short day on Fridays and its lunch breaks are long enough for students to get to local prayer rooms and back for afternoon sessions," it said.

"The nearest prayer facility is less than a five-minute walk away and provides a Friday Jummah service that is well attended by LAE students."

It added: "We therefore disagree with the suggestion that not having a prayer room on site is an indicator of institutional Islamophobia. The staff and governors of LAE celebrate our diversity and do everything we can to run a happy, healthy, scholarly community that remains true to our core values of kindness, respect, independence, resilience, humility, and excellence."

Established in 2012, LAE is a free school, which means it receives direct government funding and is not run by the local authority.

The school is in the London borough of Newham, which has the second-highest percentage of Muslims in the UK at 32%.