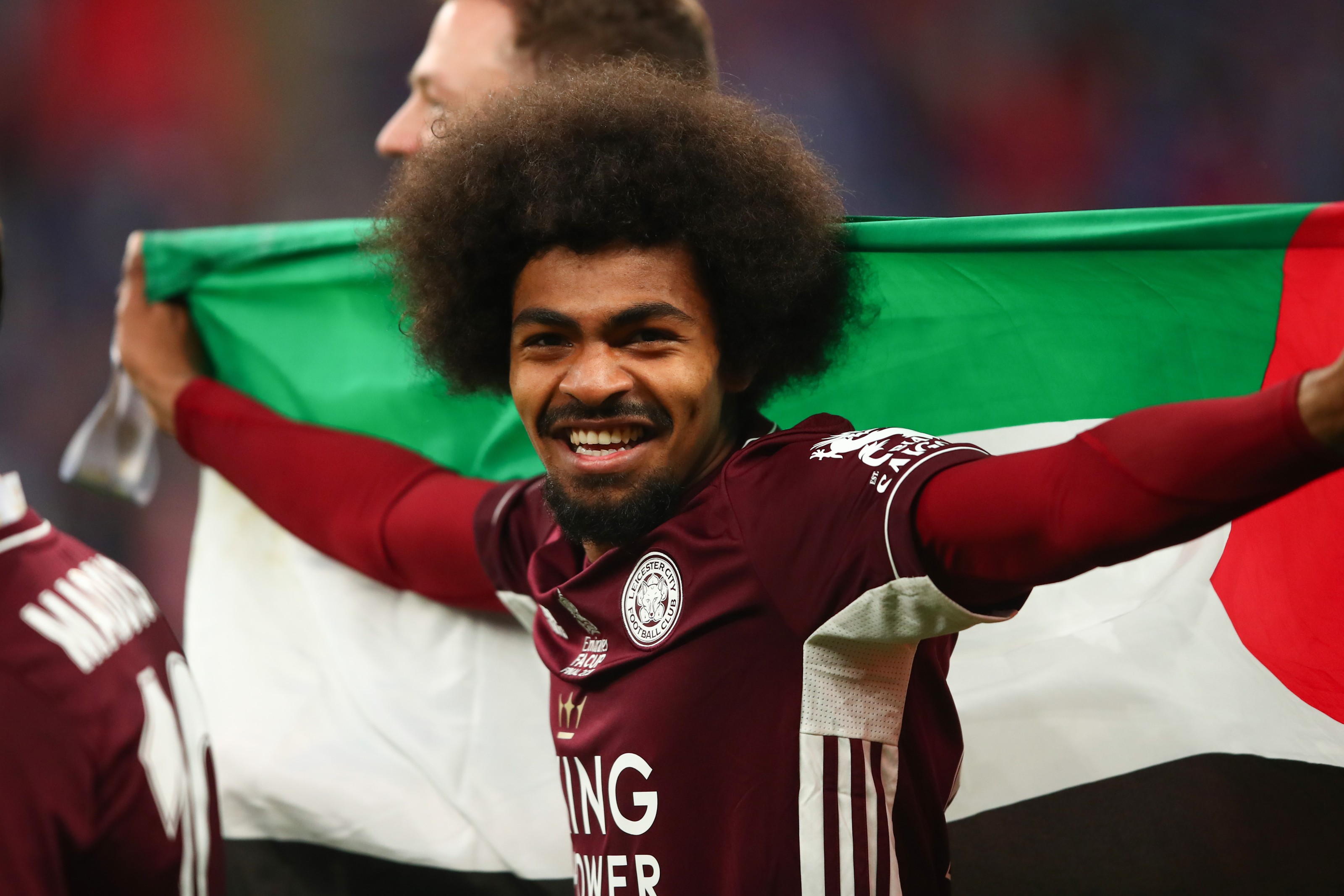 At the oldest, and one of the most popular, cup competitions in the world, two Leicester City players — Hamza Choudhury and Wesley Fofana —  held up the Palestinian flag as they celebrated their victory over Chelsea in the FA Cup final.

Nearly ten million viewers in the UK and many more millions across the globe saw the two Muslim players show solidarity with the Palestinians. Images and videos of the moment went viral on social media with many quick to praise the two players. The Palestinian ambassador to the UK, Husam Zomlot, thanked the duo in a letter. And it’s sparked similar actions from other footballers in the UK — most recently from Manchester United’s Paul Pogba and Amad Diallo in the Premier League match against Fulham.

Leicester City fans Wasim and Adam were itching to get back to watching live football following the easing of lockdown restrictions.  “I have gone to all the games — both home and away — for about 8 years,” says Wasim. “This was the first game we’ve been to since lockdown. So obviously, with it being the FA Cup final, we were really happy to be there.”

They took two Palestinian flags with them to show solidarity. They put one behind the goal and kept the other flag to wave during the match in the hope that the cameras would catch it.

“I knew it’ll be broadcast around the world as it’s the FA Cup final,” says Wasim. “Initially, I just wanted to get it in the crowd and get it on camera. So if someone in Palestine saw the match, they’ll know they’re being supported and it would be a big morale boost for them.”

“Secondly — we thought it’d be a long shot — but if Leicester did win, we wanted to get it to one of the players.”

With fans once again allowed back in stadiums, Wembley needed stewards to manage the crowd.

Luton-born Maahiul Alam ensured things were running smoothly at the turnstiles. But he was eager to be pitchside and watch a bit of the cup final.

“Initially, I wasn’t allowed to go but after all the fans were checked in, I was told I could go in the second half,” says Maahiul.

The 19-year-old was in front of the Leicester City fans and immediately spotted the distinctive Palestinian flag in the crowd: “When I arrived pitchside, I saw two bros holding Palestinian flags,” says Maahiul. “I thought ‘no way!’ It made me happy to see these fans bring the flag.”

“I saw a Palestinian flag, can you go and get me it?”

“I saw Hamza and he came towards me and signalled towards me,” says Maahiul. “Initially, I wasn’t sure if it was me he was calling, but he did it again, and so I went to him.”

Maahiul, of Bengali heritage like Hamza, felt he had to do it. “I thought he wants the flag, I need to make it happen! He’d be walking around with it and it’ll raise a lot of awareness [about the situation in Palestine].”

Wasim and his friend saw the exchange between Hamza and Maahiul. “We went to the bottom to celebrate with the players,” says Wasim. ”Hamza spotted the flag and asked the steward [Maahiul] to give him the flag. And so I threw the flag to the steward.”

With the flag in his hands, Maahiul was trying to get Hamza’s attention, who by now was busy celebrating with his teammates and other fans.

As he was trying to get to Hamza, a senior Wembley steward rushed over and tried to stop Maahiul from giving the flag.

“He goes ‘what are you doing” in an aggressive tone,” says Maahiul. “He said who asked for it, and I pointed to Hamza. He said I’m meant to be doing my job and that I couldn’t do these kinds of things.”

According to both Maahiul and Wasim, Hamza noticed the altercation and jumped over the advertising hoarding to grab the flag.

Maahiul says the Wembley steward “went a bit crazy” at him, taking down his details and demanding to know which agency he worked for. He alleges the steward said that Wembley security had been wanting to confiscate the flag the whole game.

“I was shocked by the remark and asked him to clarify, and he repeated it: ‘The flag you just gave away, we’ve been trying to take that down. And now you’ve given it to a player,’” says Maahiul.

Wasim didn’t hear that particular comment but confirms the head steward was quick on the scene and tried to stop Maahiul from handing over the flag.

During the game, he had no trouble from the stewards or Wembley security: “We had stewards around us all day and no one said anything,” says Wasim. “We always had it [the Palestinian flag] in full display.”

Support from the crowd

The commotion didn’t go unnoticed amongst the wider Leicester City fans. “They saw [everything] and were supportive, which actually surprised me!,” says Maahiul. “Non-Muslims were shaking my hands and saying I did good.”

Wasim was also pleasantly surprised by how well the flag was received by fans in the stand. “I thought there might be some backlash or some comments,” he says. “But everything was positive, not even once did we get anything negative. We even heard comments like “‘Free Palestine.’”

And how did the pair feel when they saw Hamza wheel away in celebration with the flag?

“It was all a blur at that moment,” says Wasim. “We were already buzzing about winning [the FA Cup] and this was just the icing on the cake”

Maahiul, having got in trouble for giving the flag, was ordered to keep looking at the fans and not at the pitch. Even so, he managed to see the flag in action thanks to the big screen behind the goal: “For a split second, I saw Hamza with the Palestinian flag and I was like, SubhanAllah, the flag is out there. Everyone will be talking about the flag!”

Some have implied that waving the Palestinian flag in a sports event is a political gesture — and that sport and politics shouldn’t mix. Others have pointed out that there’s nothing wrong with showing solidarity with Palestinians — a group of people that have been under occupation for decades. They draw parallels with the support for the Black Lives Matter movement and when sports stars show solidarity when international tragedies occur.

Wasim agrees that it’s not a provocative gesture: “At the end of the day, it’s just a flag.

“We’re not belittling anyone. We’re not taking someone else’s flag and burning it, or stomping on it. They [Leicester City players] just showed solidarity with a flag. There was no message, no banner… I don’t see anything provocative at all in that.”

The Football Association (FA) quickly rebuffed any suggestions that the Leicester City duo should face any disciplinary actions. The FA said it does not investigate the general use of internationally-recognised national flags on the field of play or in the stadium.

“I had to make it happen”

Like most Muslims, the pair say they’ve been aware of the Palestinian cause since a young age.

The plight of Palestinians only gets media and political attention when violence occurs between both sides. But all too often, the ongoing one-way violence of occupation and forced displacement of Palestinians is conveniently ignored.

And trying to raise awareness of that situation was important for Wasim and his friend: “I’m not an activist or anything like that, this was just a chance to do something.”

For Maahiul, the recent escalation — and in particular the storming of Masjid Al-Aqsa during Ramadan — brought the issue back to his attention.

“I don’t feel like anyone cares about what happens in Palestine,” says Maahiul. “The media isn’t showing anything, the government isn’t doing anything, so we should do something to raise awareness.”

He feels blessed that he played a small part in making it happen: “Out of everyone, Allah chose me to give the flag to Hamza. I had to make it happen!"

“I think it happened because the day before I prayed tahajjud salah. I always pray tahajjud before big events so that my safety and affairs are set in place. I made dua for Allah to give me success in my work."

“And my dua was answered.”