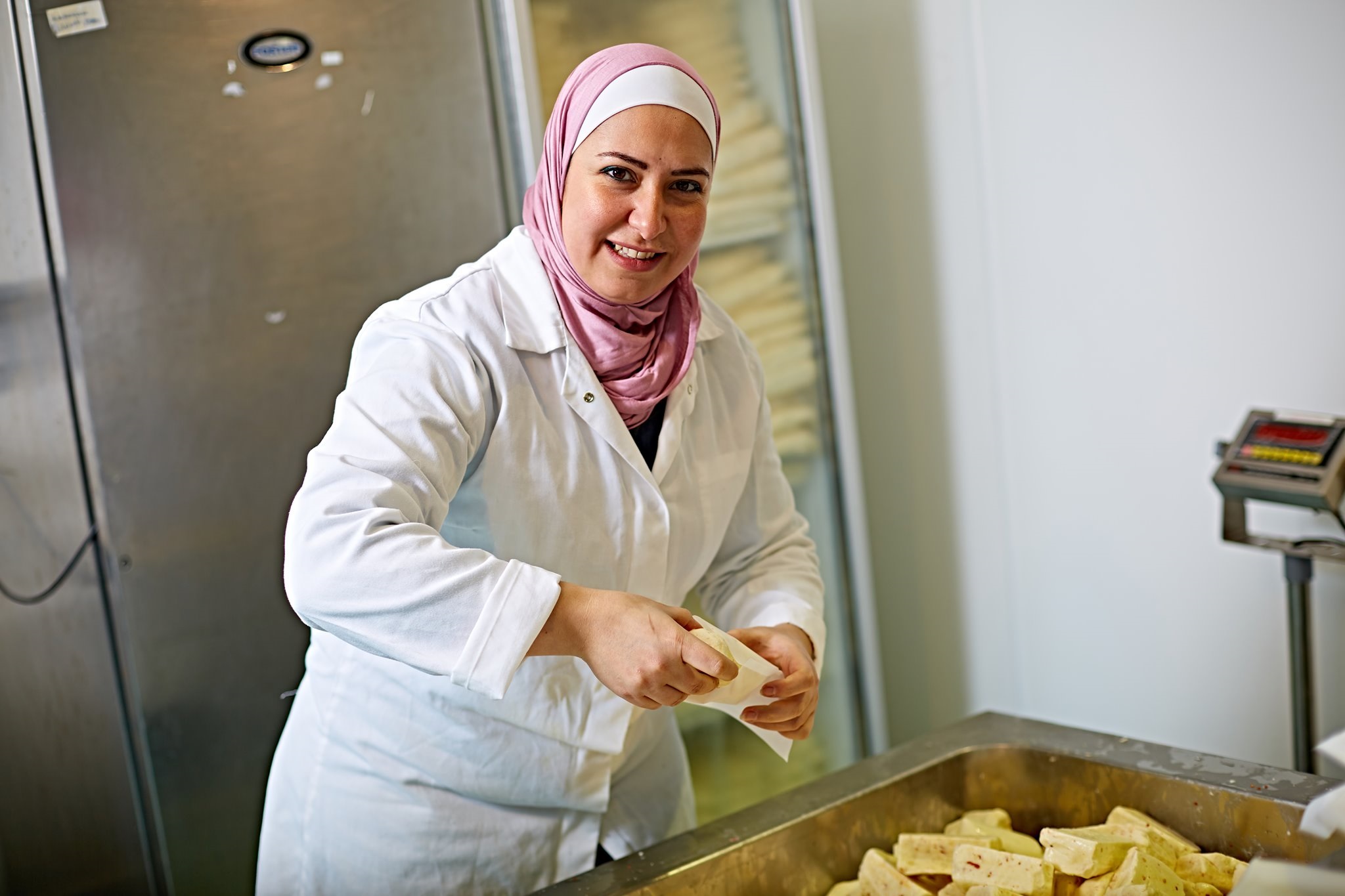 This is the remarkable story of Razan Alsous – a Syrian refugee who lost almost everything back in 2012 to become an award-winning cheesemaker just a few years later.

‍Originally from Damascus, Alsous was studying pharmacology at university. But because of the war, she didn't graduate and complete her degree after fleeing from Damascus in 2012 due to a near-death experience from a car bomb. She eventually settled in Yorkshire with her husband and three young children.

"Leaving home was not an option and it's not something you aim to do," Razan reflects. "But sometimes you need to do it. Actually, we denied leaving our home until an explosion happened at my husband's office. It's he's in the sixth floor, and there were a car bomb just under his balcony. We've got three children and if you ask me if it was just up to me and my husband, we might not have left Syria. Because sometimes it's not easy to leave home. But I have children and my son was 10 months old. This has made us to get this decision because we have responsibilities."

Though Razan studied pharmacology back in Damascus before arriving in the UK, one might have thought it would contribute towards her cheesemaking skills, but that just wasn't the case whatsoever. She tried to contact some universities back in 2012 but the law didn't count Syrians or refugees as home students. She even tried to go to college to learn English, but she wasn't allowed to do so for three years because of her refugee status.

"This was absolutely new. I never even thought about it. Even in Damascus. I'm a cheese lover as like cheese. Like lots of people actually love cheese. But I never thought how it's done or how to make it. In general I've got good cooking skills. And honestly, when we came here, the first thing you think about is 'what next?' 'What is the next step?' And when you are just striving for more then you don't really need to think in the traditional way."

It was there and then that Razan started to think about talents. She thought about different projects at the beginning until she thought about how popular Halloumi cheese was in the UK upon a trip to a supermarket. There, the foundations of her business idea began.

"Halloumi cheese is very trendy in the UK," Razan said. "I didn't know that until I started doing my research and finding by numbers the amount of cheese exported around. Then this led me to a question like, how many cows are there wherever you go to the countryside? We find lots of cows and sheep everywhere. And this is actually due to the constantly changing weather. So we have here a really good quality of milk. So at this point, I thought it was like October, we went to the supermarket to do our usual shopping. And I looked at the shelves; it wasn't there as we eat this cheese every day in Syria. It's our traditional cheese. So I thought, 'whys there no cheese?' So I did ask the staff; they said because it's not the season. I was honestly surprised that is there any season for halloumi.

I meant to do the halloumi specifically because I can tell whether this is a good cheese in general. In the Middle East, we have more fresh types of cheeses. So I was thinking just actually, and what I've found very interesting, is when I saw the information when I found that the UK is the second-largest consumer of halloumi, all the while there are lots of local resources for good quality milk and the raw materials are available.

Then, later on, I knew that many British people go to Cyprus in summer, this is why they feel it's like a summer product, not for the whole year. And from this point, I told my husband, 'okay, I will make it.' And I started to research how to make the cheese. As with any project, when you start, making the cheese is the hardest thing. Then, later on, you'll find this was the easiest part of it, especially in a food business like establishing a business in the UK. It requires lots of documentation, lots of training. So here was my background in microbiology, And I had to understand hazard analysis and Critical Control Point systems in food manufacturing, as I just started doing my research. I looked in websites just for references about dairies in general and to understand food manufacturing. And I managed to do that just by reading about it and understand it by myself. And that's how we started."

This led to her cheesemaking business, Yorkshire Dama Cheese, being functional, with a selection of halloumi, labneh yoghurt and squeaky cheese. Eventually, as word-of-mouth got around about her cheeses, Razan won awards such as the gold status at the World Cheese Awards in 2018-19 and Gold at the British Cheese Awards in 2018, to name a few. The Prime Minister also nominated Razan for an award on International Womens' Day 2015. She also had a nomination for Woman of the Year 2016.

"The first award we won was the bronze prize for the World Cheese Awards, which we achieved after only four months of us starting to make cheese. And this was the best one because this was what led us to what we were doing was correct. And later on, we won the golden award and lots of silver ones as well. I love cheese competitions because this enables us to understand where are we in the business, let the specialists taste the cheeses and judge them in terms of quality because each business needs to really learn lots of aspects. And one of them is to have a consistent product and have it to the same standard all the time. And this is what we managed to achieve.

Last year during the pandemic, we did work on our accreditation, and we have obtained it, which is a little bit higher than just being approved by the environmental health authorities because we need to be safe supplying retailers and supermarkets."

So what's next for Razan and Yorkshire Dama Gate?

"We are working on both ways to increase our production, and it requires more capital. This was the plan before the pandemic, but after we start to think in different ways, we are thinking on in more having like the speciality cheesemakers style because we don't like when you don't know what next or you are in uncertainty, especially with the lockdowns you feel lifestyle is changing you need to make your own identity.

We are making new products like butter at the moment and have started to make cheese from sheep's milk as well as sheep's yoghurt. So this is how we are working at the moment in our business, wishing in the future to have better premises, having a place where people can come over and visit see how cheese is made and even to have some cheesemaking courses. We would love to do something like this because behind our cheese; it's not just a cheese to eat; there's a story. There's a resilience story, actually. And it's always good to give this positivity to others. So hopefully, we can do it in the future."

As a Muslim, Razan is a strong believer in her faith, and she explained just how much being a Muslim with total faith in Allah in hard times led to where she is now. So how much of a role does Islam plays a role in her business?

"Honestly, being a believer gave me strength," Razan said. "Because if you think how we started this, you would think we would never achieve anything. But I felt all the time that God is supporting us. And I'm always saying I'm a hard worker, but I don't think this is done all by myself. Because lots of people ask, which marketing company do I have? And I told them there's one marketing team who did arrange everything for us. I felt I've been really supported all the time.

Whenever we feel that we are falling down, we found His hands lifting us up. I've been lots of times in this position where I thought, what next? How can we go any further? And I felt I don't think we can go any lower. Then suddenly, I find that new opportunities are coming to us. So Alhamdulillah, I'm a good believer. And I think when you feel God is supporting you, then you don't feel afraid of anything. You will accept your destiny because we've been passing through lots of hard times. And honestly, like I can tell you, in 2020, we've been headed by Storm Ciara where we found our premises all flooded, and lots of lost lots of mud everywhere. You can't stop all these disasters. Honestly, I was really devastated and heartbroken."

I then thought that God would help us as He is the one who made us reach this point in our journey, and He would not leave us now. Because if you are a really generous person, you won't leave your friend in really hard times. So what about God, who is really the most generous and is al-Kareem. So definitely, God will not leave us neither now nor later on because he's been supporting us all the time."

Razan also shared a message of encouragement to everyone struggling through these hard times to Islam Channel viewers and readers:

"I always say behind as we say behind every successful man there is a woman, but behind each successful Woman is a man, because my husband held my hand with me and supporting me all this time. I would say having a strong family will keep you going and support each other. You can together build a better future. And I encourage all families to take part in the community. Don't feel scared, we are not doing something wrong. As long as we are just acting in the correct way and doing what we are believing in at the end of the day. God wants us to be good people. He doesn't want us to stay at home and feel scared for no reason, actually. God is for everyone. So if we just be positive, we will attract the other positive people as well."