Khushu — the essential quality of prayer 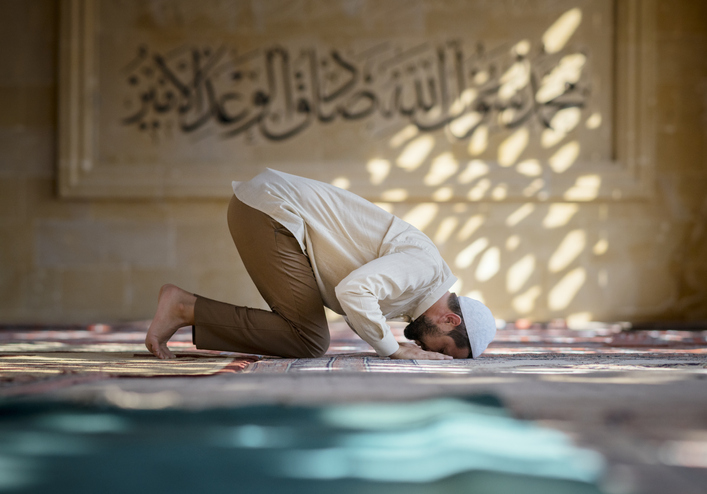 What is khushu and what might it have to do with becoming better God-centred leaders? Iqbal Nasim explores.

Khushu is perhaps best translated as attentive humility. It’s an ‘action’ of the heart by which we become more present, serious and subdued. It shows itself in the stillness of our bodies and the lowering of our gazes.

God says, “Prosperous indeed are the believers! Those who pray humbly…” (23:1-2). This famous opening to the chapter entitled ‘The Believers’ emphasises how vital khushu is for our overall success, for true faith and for prayer. In fact, we should think of khushu as being just as essential for our prayer as wudhu!

The other key reference to khushu as it relates to prayer is particularly telling. “Seek help with steadfastness and prayer — though this is hard indeed except for the humble, who know that they will meet their Lord and that it is to Him they will return.” (2:45-6).

This can be understood to mean that the prayer itself will feel very difficult for anyone who doesn’t have enough khushu. So if we feel that prayer is becoming burdensome sometimes, now we can start to see why!

What can we do about it? Well, the verse also suggests that the extent of khushu correlates with the level of our conviction that we are, and will be, meeting our Lord.

If the return to Him feels like it’s just around the corner, our hearts will become both alive and humble. If we see it as something far away, then we ourselves are creating a distance that results in greater disconnection.

You see, it’s an issue of mindset. This is why one of the things I emphasise heavily in the Transform My Prayer course is taking your time just before you begin the prayer. It’s an absolutely crucial moment to reflect on your standing before God and to reorient your mindset – basically to ramp up your khushu – before you begin offering your Salah.

Open yourself up to revelation

Our Lords tells us that, “Another of His signs is this: you see the earth lying barren, but when We send water down on to it, it stirs and grows…” (41:39)

Think of your heart as a piece of land. What kind of land is it? Is it loose, fertile soil, ready to receive the rain of revelation? Or has it become contaminated, clumped up, perhaps hardened, such that rain can’t penetrate and growth becomes difficult if not impossible?

“Is it not time for believers to humble their hearts to the remembrance of God and the Truth that has been revealed, and not to be like those who received the Scripture before them, whose time was extended but whose hearts hardened and many of whom were lawbreakers? Remember that God revives the earth after it dies; We have made Our revelation clear to you so that you may use your reason.” (57:16-17)

If we want to have more khushu in our prayer, we need to spend more time pondering and internalising the messages in revelation. If we struggle to spend time with the Quran, one of the main reasons is that we suffer from a lack of genuine curiosity to find the gems it contains.

We must prepare the grounds of our hearts to receive. To do this, it’s vital that we pay more attention to how we apportion our attention! If we allow ourselves to consume and be consumed by meaningless or futile content in this age of exponential media and messaging, we may well be affecting our hearts in ways that neither allows the Quran to penetrate, nor allows true presence and humility in prayer.

Elsewhere we are told that revelation “increases their humility” (17:109), and famously, that had revelation descended upon a mountain, “you would have seen it humbled and split apart in its awe of God” (59:21).

Is khushu half of leadership?

Khushu is not just for prayer, it’s for life. So it makes sense that it would relate to how effective we are as God-centred leaders too.

There is a famous business book called Good to Great by Jim Collins. In it he extols the virtues of what he calls Level 5 Leaders:

“Level 5 leaders display a powerful mixture of personal humility and indomitable will. They're incredibly ambitious, but their ambition is first and foremost for the cause, for the organization and its purpose, not themselves. While Level 5 leaders can come in many personality packages, they are often self-effacing, quiet, reserved, and even shy.”

I haven’t related the quality of khushu explicitly to leadership in my mind before, but the Level 5 Leadership concept got me thinking about this half of the equation. Surely a deeply authentic humility when engaging with others can only exist and be nurtured by one’s increasing humility before God Himself. We become truly “self-effacing, quiet, reserved, and even shy” (interestingly all well-established qualities of the final messenger) when God’s power and majesty are forever present in our hearts.

So more khushu shouldn’t just mean a better relationship with God. It should mean better relationships with people in general and, when we have leadership responsibilities, it should help us become more effective at fulfilling them with excellence.

This article was originally published here