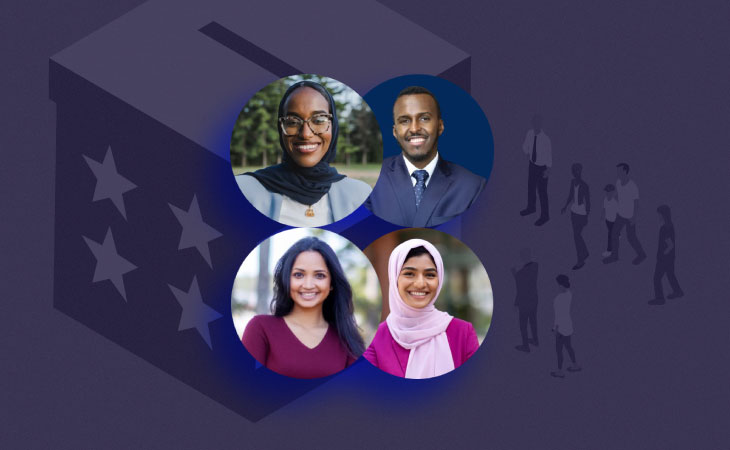 Muslims increased their presence in US politics with a record-breaking 82 Muslim electoral victories during this week’s midterms elections.

According to Jetpac Resource Center and the Council on American-Islamic Relations (CAIR), a record-breaking 146 American Muslim candidates ran for local, state and federal office, including 51 state legislative candidates in 23 states.

The 82 elected is the highest since Jetpac and CAIR started tracking the electoral progress of American Muslims.

“We are witnessing the next step in the American Muslim community’s political transformation from marginalized voices that were sidelined, or worse, to decision makers. These newly-elected officials are building upon the success of our community’s decades-long investment in civic engagement, voter registration and running for office," said CAIR National Executive Director Nihad Awad.

“We call on all American Muslim elected leaders to draw inspiration from their Islamic faith and work for the best possible future of all Americans.”

Jetpac Resource Center Executive Director Mohammed Missouri said: “I’m inspired by the historic wins we are seeing in local and state elections across the country. It shows that the Muslim community is building solid infrastructure for sustained electoral success."

Twenty-one incumbent state legislators won re-election and were joined by 16 Muslim candidates to increase the number of Muslim state lawmakers nationwide to 43.

Illinois elected its first Muslim state legislators in Abdelnasser Rashid and Nabeela Syed, who will serve in the Illinois House of Representatives. At 23, Nabeela will be the youngest member of the Illinois General Assembly.

And in January, I’ll be the youngest member of the Illinois General Assembly.

Democrats Mana Abdi, Deqa Dhalac, and Ambureen Rana are the first Muslims elected to the Maine State Legislature, all to State House seats.

With four Muslims, it means Georgia now has the second highest number of Muslim state legislators in the country, second to Minnesota who elected its first Muslim woman to the State Senate in Zaynab Mohamed — taking its total to five.

Young people, Black and Brown people, Indigenous people, and women made this happen. This is your victory. #EasierNotHarder 💜 pic.twitter.com/8tFA8mrV50

In North Dakota, Hamida Dakane also made history, becoming the first woman of Somali descent elected to the state House.

In Michigan, Alabas Farhat won his race for state representative to double the state’s tally, while Tarik Khan successfully ran for the Pennsylvania House of Representatives to give the state three state legislators.