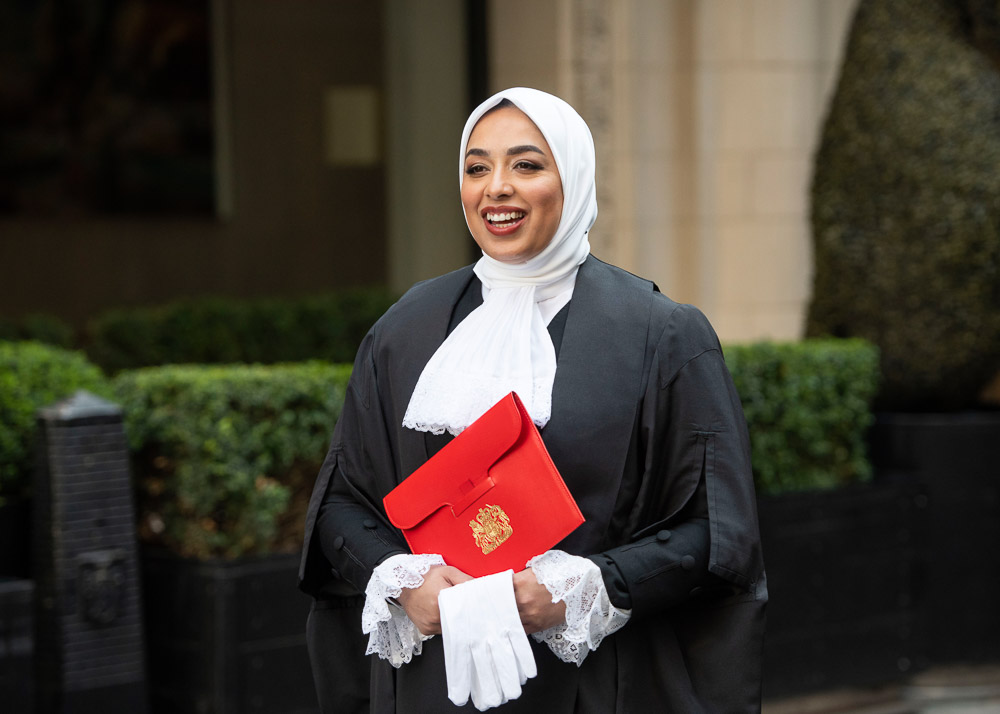 Sultana Tafadar made history this week when she became the first hijab-wearing criminal barrister in Britain to be appointed Queen’s Counsel (QC).

The experienced human rights and criminal justice barrister received her Letters Patent — the award for excellence in advocacy — at a ceremony at the Palace of Westminster on Monday.

Sultana said she was "thrilled to be joining the ranks of trailblazing female QCs" but also made a point to raise awareness about the plight of women around the world who are discriminated against for wearing the hijab.

“I am delighted to be one of two hijab-wearing barristers ever to have been appointed Queen’s Counsel, and the first at the Criminal Bar," she said.

"Yet on such a day, when I am rising to the pinnacle of my profession in Britain, I note with great sadness that the same opportunities are currently denied to hijab-wearing women in other countries, such as France," she added.

Sultana joins an elite group of lawyers that are appointed Queen’s Counsel — and only the second hijab-wearing barrister to become a QC after Shaheed Fatima.

There are around 2,000 QCs in Britain, which is less than two per cent of the entire legal profession.

“Representation is important and the Bar can be a difficult terrain to navigate for those of us from non-traditional backgrounds, but it is changing. Sixteen years ago, when I first started at the Bar, it was a lonely place: there were few black and ethnic minority women, and no other hijab-wearing criminal barristers. We are breaking through these barriers, and I hope many other young women will now feel they can also reach the dizzying heights of the profession regardless of their race or religion," said Sultana.

Ranked in the Legal 500, Sultana is highly regarded for her work in human rights, counter-terrorism and national security, and international law.

She is involved in the legal campaign to end the hijab ban in France and will soon make submissions to the United Nations on how the French government is in breach of international law.

Born and raised in Luton to immigrant Bangladeshi parents, Sultana elected to study law and was inspired by the American Civil Rights Movement.

“Growing up in the 80s and 90s, I saw lots of injustice, and racism. I took inspiration from the Civil Rights Movement, Martin Luther King and Malcolm X. I knew I wanted to be an activist lawyer," she said.

Sultana has persevered, despite the challenges she has faced as an ethnic minority, hijab-wearing barrister: “There have been times I have been mistaken for the defendant or the interpreter. I’ve faced a plethora of challenges owing to my gender, race and religion. It’s been tough, but I see my clients coming from diverse backgrounds who are also suffering similar discrimination."

"For me, the law is a tool to remedy these things and to achieve grand ideals like equality. It reminds me of why I joined this profession and why I need to succeed.”