“Cost of living crisis: Time to reach out to those in need” 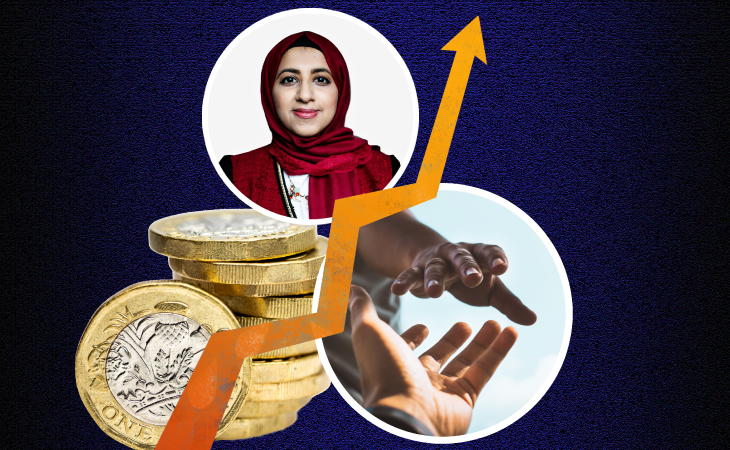 With many fearful and anxious about the future, Muslim communities are stepping up to the challenge, ready to yet again serve those most in need, says Islam Channel columnist Zara Mohammed.

Last week, inflation hit double digits for the first time in 40 years. On the back of spiralling energy and fuel costs as well as stagnant wages, we are all bracing ourselves for tough times ahead. Decades of deep-rooted inequalities, the pandemic and now a cost-of-living crisis are exacerbating an already racialised poverty gap.

Of those who will be impacted, Muslim communities will be among the worst affected. 46% of Muslims live in the bottom 10% of the most deprived Local Authority Districts in England. The National Zakat Foundation reported a 90% year-on-year increase in applications for its hardship relief and Zakat funding deficits are running into hundreds of thousands of pounds in some parts of the country.

According to  research by People Like Us, 34% of people from racially diverse backgrounds can no longer afford to pay their bills, rent or mortgage each month. 29% of ethnic minority professionals are looking to downsize or plan to move back in with their families.

The effect on young people is chilling too. Almost half of Muslims are under 25 and a poll by the RSA revealed that 47% of people aged 16 to 24 were unable or just about managing to make ends meet each month.  Furthermore, almost half of 16- to 25-year-olds have gone to bed hungry in the last 12 months, according to youth homelessness charity Centrepoint.

Looking beyond just headlines and statistics, my own travels opened my eyes to the struggles of Muslims across the country. Ordinary people are having to make difficult choices, such as whether to buy food or pay bills, and during the school holidays staying hungry to feed their children.

Heartbreakingly, during Ramadan, we heard from Muslims who had to sacrifice Ramadan with the family or had to miss Taraweeh prayers to work extra shifts and make ends meet.  In some of the most deprived areas in the UK, young people with already limited opportunities are having to leave education early to support the family income.

Muslim groups rising to the challenge

These stories paint bleak a picture. However, I have met many Muslim organisations and community groups across the country who are rising to the challenge. I saw extensive efforts first hand, from Glasgow to Batley; Manchester to Leicester and Newport, to name a few, where everyday heroes have picked up much of the slack, providing a vital lifeline and moral support to the most vulnerable. In Wales, the efforts of the Al-Ikhlas Cultural & Education Centre in Adamsdown, Cardiff went viral as they recently doubled their capacity to provide 400 food parcels a week to meet soaring demand.

Alongside helping with needs such as food and clothing, some community efforts are extending to supporting people emotionally too. The inspiring Al Ghazali centre in Liverpool is encouraging young people to take part in sports at a national level and even employing some of their service users to help run activities. The Ethnic Youth Support Team in Swansea gives young people a space to learn new skills and get involved in sports. These kinds of initiatives give people a coping mechanism; a tribe or community of people with similar struggles to lean on when times are tough.

However, many, including in our own communities, who need help and are entitled to it, aren’t coming forward. Out of shame or for fear of being stigmatised, so many people are losing out on vital support. My message to everyone is simple — there is no shame in seeking help, nor is it ingratitude to Allah SWT to ask for help. Rather, to come forward is an act of bravery and it takes courage.

My observations across the country have inspired me to do more to help too. Last week, I chaired a panel of leading minds looking at solutions to the crisis and working with interfaith and civil society partners, The MCB is working to do all we can to help influence policy and also support real work on the ground.

I am passionate about our community creating spaces where families can talk and find emotional support. We are working on creating resources for our affiliates so they can help those in need in line with their capacity, but also signpost people to where they can get help, whatever their situation.

Our deen is a deen of hope; and we must all play our part in helping those in need, but most importantly, not lose hope in Allah SWT.  May He alleviate the condition of those in need.