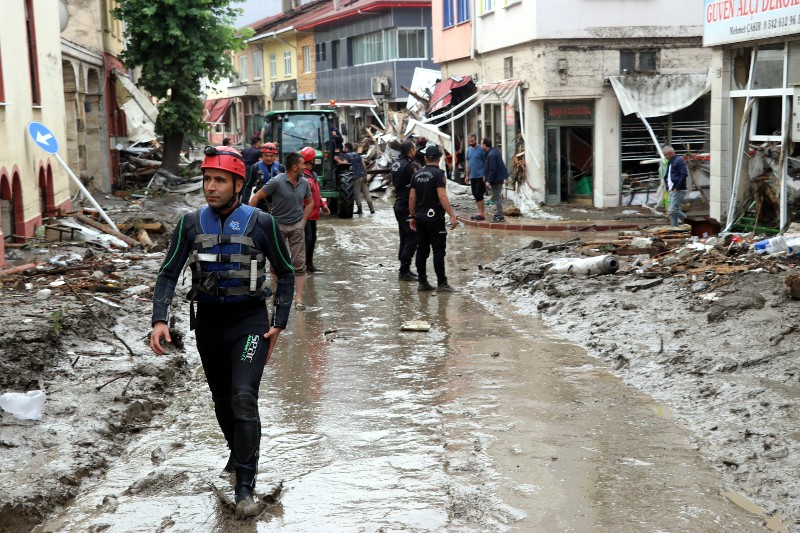 Turkey battles flash floods in the Black Sea region as the death toll rose to 27 on Friday.

These floods in Turkey's northern region, in the provinces of Bartin, Kastamonu and Sinop, are among the worst Turkey has experienced. The news comes as a devastating blow as 167 wildfires that killed eight people and destroyed areas of Marmaris, Içmeler, Bodrum and Manavgat in Antalya, on Turkey's south coast, had finally been brought under control by the emergency services. Search and rescue teams continue to look for survivors.

The flooding caused the water to flow around dozens of cars and heaps of debris along streets, with bridges destroyed, roads closed and electricity cut to hundreds of villages.

Media reports said President Tayyip Erdogan was to visit the region on Friday. On Thursday night Erdogan said: "I offer my condolences to the loved ones of our 17 fellow citizens who lost their lives." Since this time, the death toll has increased still further.

"This is the worst flood disaster I have seen," Interior Minister Suleyman Soylu said after looking through the damage that extended across the provinces of Bartin, Kastamonu and Sinop. "The risk that our citizens face is high... There is a lot of damage to infrastructure."

Authorities said that the floods rose in some parts as much as four metres high. Rescuers had to evacuate a hospital holding 45 patients in the region around the coastal city of Sinop.

On Wednesday, agriculture and Forestry Minister Bekir Pakdemirli warned about the floods that it was "a disaster that we had not seen in 50 or 100 years".

Pakdemirli said that Erdogan was speaking to regional leaders and promising to deliver all the assistance available to the state.

The deluge damaged the region's power infrastructure, leaving about 330 villages without electricity. In addition, five bridges had collapsed, and many others were severely damaged and destroyed, leading to road closures.

Turkey's meteorology authority said further heavy rain was expected in the central and eastern Black Sea region and warned of further floods until the end of this week.

News
Taliban announces that women can be educated at all levels

Taliban announces that women can be educated at all levels
National Council of Canadian Muslims say Islamophobia 'systemic' since 9/11
Twenty years on from 9/11: a three day focus on The Review on Islam Channel