Feature: How Muslim charities are fighting the UK poverty crisis 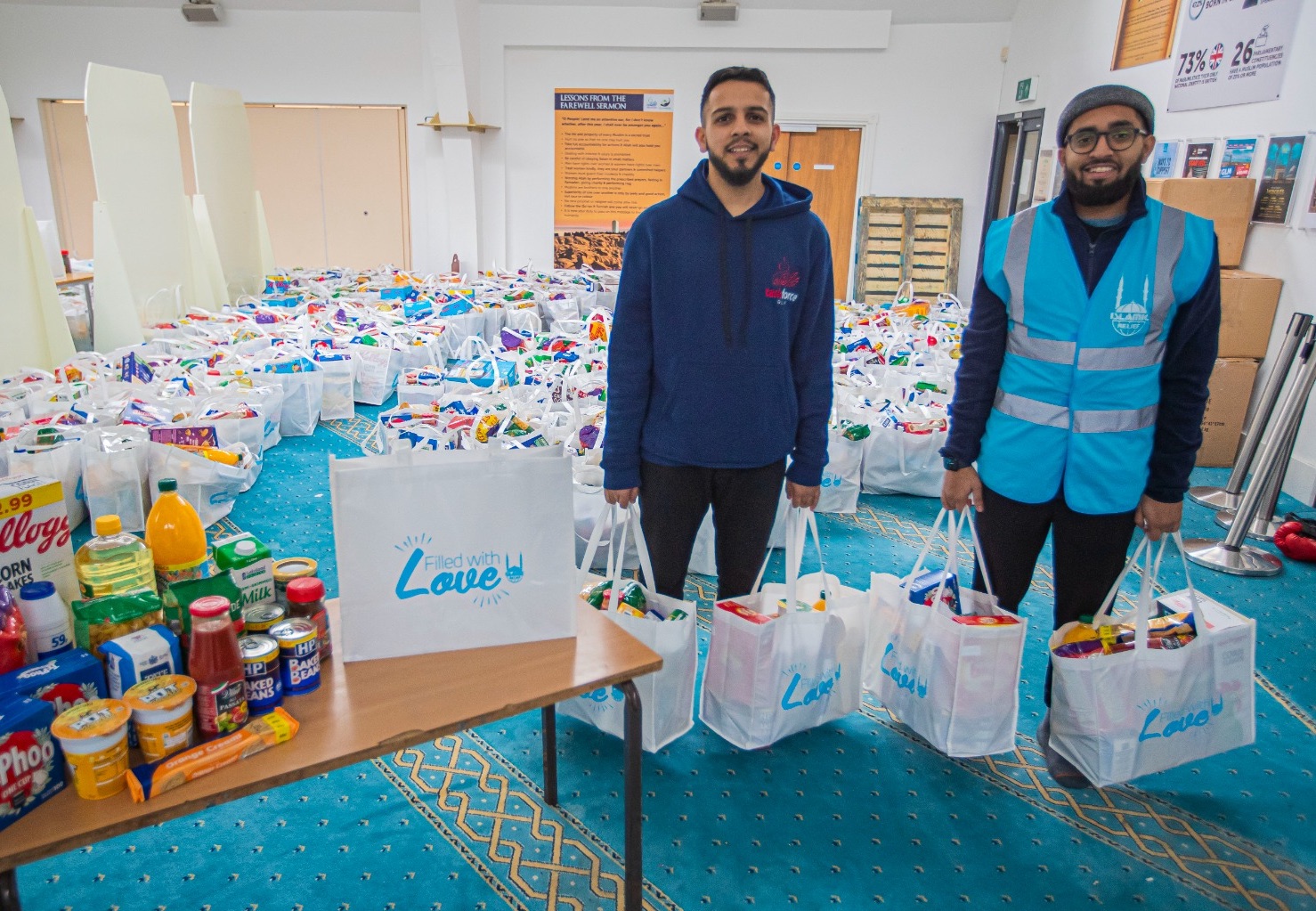 This winter’s been bleak for those on the breadline. Many are facing the cost of living crunch, having to deal with the double whammy of inflationary pressures and benefit cuts.

The ending of the pandemic furlough scheme and the removal of the £20 Universal Credit has added further pressure with some families struggling with even the basics, such as food and heating,

A survey by the consumer charity, Citizens Advice, in November found that one in ten families - around 3.2m households - would be in the red or unable to cover the essentials. The report also found one in 10 would need to use food banks.

It adds to the chorus of charities across the UK who have highlighted that unprecedented numbers of people are now turning to food banks.

Increase in use of food bank services

Birmingham’s Green Lane Masjid has operated a food bank service for over six years in Small Heath - one of the most deprived areas in the country.

The group runs its foodbank and soup kitchen twice a week for some of the most vulnerable people in the area. Muhammad Ali, the welfare and youth services lead, says the situation is as "bad as we remember."

"We are a faith establishment, of course, being a Masjid but we are also a community centre. So, we take a lot of consideration into what we can support our community with and what sort of challenges it's facing,” says Muhammad.

It's not just Muslims that use the mosque’s services. In fact, in the last year, 65% of the Masjid’s food bank users were non-Muslim. Recently, along with other Muslims charities including Islamic Relief, they distributed hundreds of food parcels in the local area — again to both Muslims and non-Muslims.

"While our faith activities are targeted towards our Muslim brothers and sisters, our outreach work is for anyone who needs support really,” says Muhammad

The number of people using its services rose dramatically during the pandemic and it's remained high since — a 60% increase in the last 15 months.

But with most of the government measures that alleviated hardship during the pandemic now gone, people are struggling to pay bills, tax and rent. And with National Insurance due to rise in April, Muhammed can’t remember a more worrying time.

"If you have a large disposable income anyway, it's not going to impact you in the same way that it will affect those  already on the breadline, those people who are struggling week-to-week already,” he says.

Families who struggle to feed themselves are prioritising eating over heating.

"There's no such thing as 'energy bank' as it were. So, people might opt to go and pay their energy bills, and depend on us for the food bank," says Muhammad.

Zena Kazeme the refugee resettlement officer at Sufra NW London, a food aid and welfare charity, agrees that people are having to choose "between heating and eating."

"Just in the last week we've supported at least four families with heating their homes, because they can't afford to do it," Zena said in a recent Newstalk, Islam Channel's weekly current affairs programme.

One user of Green Lane Masjid's services is 57-year-old Rubina. Due to health reasons, Rubina cannot work and so she receives Universal Credit. But that doesn't stretch far enough — and money is a constant strain.

Some of her children, despite working, are also struggling financially: "Even though they're working, they have to rely on food banks sometimes.”

"I just feel such a failure in life," says Rubina. "That I can't really help my children because they're with young families… and they're all struggling. And when I look at them, it does worry me."

Rubina uses a specific example to show how even little things matter. She says that without the masjid's food bank support, there would've been occasions when her grandchildren wouldn't be able visit.

"These are the fine details that people miss, and it gets overlooked," says Rubina.

"I'm eternally grateful for them helping me maintain that relationship with my grandchildren and my children. Had it not been for their support, I don't think this would be the case," she adds.

As Rubina, says it’s not just those on benefits who have to rely on food banks food banks — people in work are also using the service.

"The majority of people we deal with are what we call 'the working poor," Zina said during NewsTalk.

“People already working and claiming all the benefits they are entitled to and trying, as much as they can, to break the cycle of poverty and are unable to because of policies that have been in place for several years,” she added.

A recent report by the Joseph Rowntree Foundation found poverty rates for Bangladeshi and Pakistani communities in the UK are higher than other ethnic groups.

And these communities were also more likely to have higher rates of in-work poverty and child poverty compared to others, in part due to being self-employed and working in low-paying sectors.

Bangladeshis and Pakistanis make up over half the Muslim population in the UK, according to the 2011 Census.

Dr Sadek Hamid, an academic and author, was also on our recent NewsTalk episode and he talked about how "we're seeing Muslim communities already at a disadvantage, suffering yet more disadvantage."

"The hardship has been inflicted in recent years has a much longer story - it goes back pre-pandemic and pre-austerity,” he said on the programme. “The communities here have been socio-economically disadvantaged for many decades. BAME communities generally.”

Sadek mentioned that Bangladeshi and Pakistani communities that live in overcrowded households and in areas where opportunities are limited: "It provides an unequal playing field. So, when austerity policies kicked in, it just made things worse."

"It speaks to the wider context in the society, the country that is supposed to be the fifth richest in the world, yet 20% of the population is in poverty. It really raises some serious questions, and one wonders how serious this levelling up agenda is,” he added.

The need for government to do more

Millions of people will pay an extra £693 a year on their energy bills from April after Ofgem raised the new energy price cap by 54%.

Chancellor Rishi Sunak responded by proposing a £2.5billion plan to address the rising costs. That means each household is expected to get around £350 a year – which is still well below the price cap hike.

Zina said a lot of the things that have been promised won't alleviate people from poverty in the long term, adding that the benefit caps impact Muslim and refugee families the most, as they tend to have larger families: "The issues we have in North West London is really high living costs, in terms of rent, food prices, but at the same time lower rates for welfare benefits."

Muhammed feels organisations like the Green Lane Masjid are doing their bit, but poverty is a national issue that needs to be tackled by government.

But seeing that more support from the government looks unlikely anytime soon, aside from charity what else can be done to help people break out from the cycle of poverty?

Dr Sohail Hanif, Chief Executive at National Zakat Foundation (NZF), says the problem of poverty is due to various structural issues and one part of that is the lack of financial literacy amongst the poor.

“There is this need across the board for us to invest in greater economic literacy for those who are under underprivileged and under-represented economically,” he says.

NZF has partnered with the Debt Advice Hub to give people advice on how to manage their finances. And they’re seeing good results in spending time educating people about debt. “Literacy is a powerful tool for people to understand how to prioritise and manage their finances,” adds Sohail.

Duty to our neighbours

In January, NZF distributed a record amount of Zakat - the most it's given in a month since the organisation started in 2011. It’s also seeing record numbers of applications for its hardship fund, which was up 90% in January versus the same month last year.

Sohail points out that whatever the government does, there will always be a need for the community to provide support for those who fall through the gaps. And he says Muslims always step up — it's well known that Muslims give more to charities than any other group in the UK and that we take commmunity spirit and neighbourliness seriously.

He gives particular kudos to small, grassroots projects that provide vital localised support on often shoestring budgets and goodwill. These are projects that NZF wants to support in the future.

Rubina certainly thinks her local Green Lane Masjid has lived up to its faith responsibilities.

“Without them, I don't know what I would’ve done now,” she says.

“They've given me hope, they've given me support when I've needed it, when all other doors were shut for me. And they’ve restored my faith in humanity and in religion.”

You can watch our current affairs show NewsTalk every Thursday at 9pm.

Watch the recent episode on how price rises are affecting the Muslim community.

You can also watch other previous episodes on catchup.