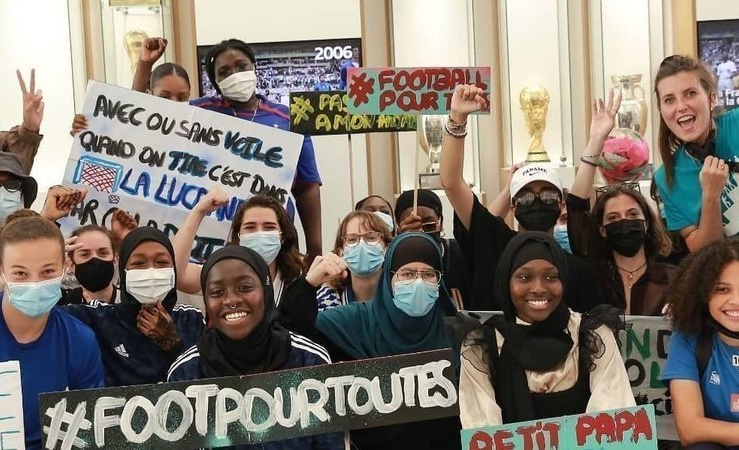 Over fifty thousand people have signed a petition to stop a controversial amendment to a bill that could bar Muslim women from wearing the hijab while playing sports in France.

Led by the Les Hijabeuses, a group of young hijab-wearing female footballers, the campaign is looking to put pressure and reverse the new policy.

"My name is Founé, I am 22 years old and I live in the suburbs of Paris. I am passionate about football and I have been fighting for more than a year to allow all women, including those who wear the veil, to practice their favorite sport in official competitions. I am a member of the Hijabeuses union," starts the petition.

"Today, thousands of women, like me, passionate about football and having made the intimate choice to wear the veil, are excluded from the fields. Being excluded from a football field was personally one of the greatest humiliations of my life. This is the case for thousands of women today in France, who juggle between abandonment, loss of self-confidence, fear and apprehension."

Two weeks ago, French parliamentarians narrowly passed the amendment that proposed the prohibition of “the conspicuous wearing of religious signs” while taking part in sports. The amendment was put forward by the right-wing group Les Republicains, which specifically mentioned the hijab.

The petition, which only started over the weekend, already has over 55,000 signatures and received widespread support on social media.

The group also posted a video of French female athletes and campaigners raising awareness of the issue with the hashtag “#LaissezNousJouer” (#LetUsPlay).

"This amendment, if passed by the National Assembly, would mean that thousands of women living in France who wear the veil will once again be excluded, sidelined, marginalised and stigmatised,” added the petition.

"These women, for whom sport represents not only a fundamental right but also, more concretely, an escape, a means of living their dreams and of realizing themselves.

"These women, these young people, these sportswomen, these students, these mothers, who are reduced to their veils, will be forced to stop."

On Monday a joint committee met to decide on the amendment, but they were unable to reach a consensus on the issue and pushed the discussion back another few days.

Reacting to the developments, Les Hijabeuses said on Tuesday: “We won our first game against the Senate. But we still need you!”

We won our first game against the Senate. But we still need you!

See you on Wednesday February 9 at 4:30 p.m. for the return match in Paris!#Leshijabeuses #LetUsPlay pic.twitter.com/qrDDsj5ahj

The French Football Federation and the majority of national sports federations in France forbid the use of hijab, using the argument of neutrality in sport or hygiene and safety. But campaigners reject those claims, pointing out that football’s governing body Fifa has authorised the wearing of headgear.

Tuesday was World Hijab Day and the founder of the movement Nazma Khan spoke to Islam Channel about the struggles hijabi women face due to anti-Muslim legislation, including in France.

Last week, social media users criticised Vogue France for its 'hypocrisy' over an Instagram post praising a celebrity for wearing a headscarf with the words "Yes to the headscarf!", given the amount of pressure Muslim women face in the country.

In November, Muslim commentators condemned the anti-Muslim French political backlash against an EU-wide campaign that was promoting respect for hijabi women.

The controversies follow the French Senate's decision last year to ban the hijab for under 18s under the contentious 'separatism bill', which prompted the viral social media campaign #handsoffmyhijab.