The ‘Running Man’ who has raised over £500k for charity 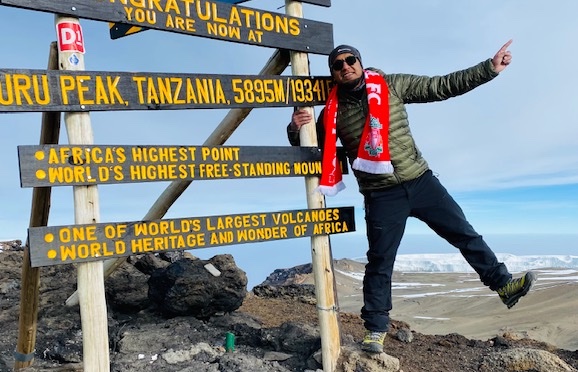 When Mohammed Afruz Miah’s GP warned him to change his lifestyle or face serious health complications, the 49-year-old took up a new hobby: running. But no one would’ve expected that two years later that decision would see him raise half a million pounds for charity.

Dubbed the ‘Running Man’, Mohammed has racked up a staggering 3000 miles in that time and is currently training to run a further 313 km from Oldham to London while fasting during Ramadan. He hopes to take his fundraising to £750k by raising a further £250k in the holy month.

An impressive amount for someone whose love for running only began in 2019. That’s when Mohammed’s doctor warned him that he had developed hypertension, which is dangerously high blood pressure, and that he needed to change his lifestyle and diet.

“I was sat on the sofa listening to the wheezing sound of my breath after a doctor told me I could suffer from a heart attack anytime or a stroke,” says Mohammed. “I wasn’t scared for myself but I worried for my young family. They didn’t deserve this.”

It came to a point that his blood pressure had to be monitored 24 hours a day. Taking the doctor’s advice, Mohammed decided to drastically change his lifestyle before the need to go on medication.

“The doctor gave me three months to make changes,” says Mohammed. “I didn’t want to go on medication for life so I decided to get fit through running. I eventually lost weight. I was 16 stones and now I am just over 11 stones."

Mohammed soon decided to use his new hobby to raise essential funds for vulnerable communities around the world. As well as marathons and mountain climbs, he has also done skydives, bungee jumps and food challenges.

His humanitarian work has led him to travel to Burundi, Bangladesh, Turkey and Lebanon.

Some of his key achievements include running eight half marathons in eight cities over eight days — more than 200 people joined him on his campaign. He also completed his first London marathon in October.

Recently, he climbed Mount Kilimanjaro, Africa’s highest mountain, in another act of endurance and raised nearly £100,000 for charity.

Mohammed says his faith plays a big part in why he does it all: “I realised that if you do things sincerely, Allah makes things happen for you. We don’t do any kind of event or campaign for a reward or award. We do it for those that need it the most.

“Islam spread due to the manners and conduct of individuals. We hope our philanthropy will paint a good picture of Muslims in the UK and about Islam too and hopefully bring communities together.

“When I see people struggling for food and water it motivates me to help the poor and destitute as Islam teaches. We are so fortunate and should be grateful for all our blessings. Our faith teaches that the more we give the more we get back,” he says.

Mohammed is preparing for the ‘Ramadan 313’ challenge, which will see him run from Oldham to London in 23 days. The route will take him through various cities, including Manchester, Birmingham and Coventry.

To get ready for the epic run, he runs three times a week without any fluid intake and follows a strict diet. He runs 25-30 miles a week in preparation for the strenuous journey.

Mohammed was honoured by the Queen in the New Year and received a BEM for services to charity. He was also a finalist at the recent British Muslim Awards 2022.

“I initially ran for health reasons but now I run to inspire and motivate others to do the same. Over 50 people join me every week in running sessions,” says Mohammed.

“I would like to show gratitude to Allah who has given me the ability to do my bit for humanity and serve different communities, especially during these testing times.

“Also, I want to thank my family without whom none of this would have been possible. A special mention to my rock, my pillar of support during these unprecedented times, my amazing wife. I also pray for my parents who raised me selflessly.”