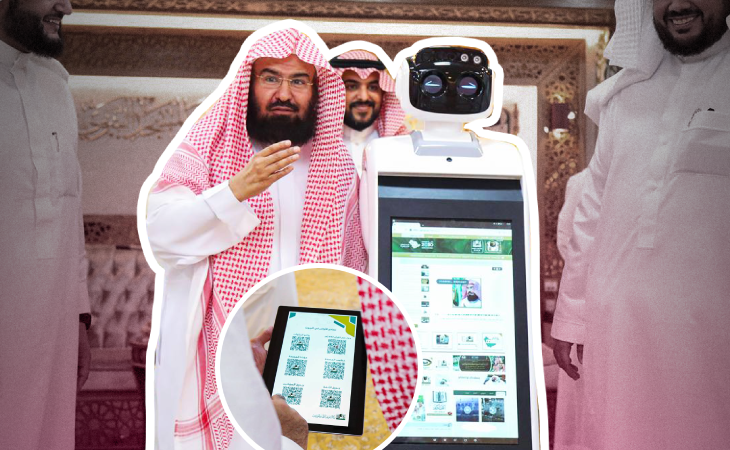 Saudi Arabia continues its drive to use modern technology and artificial intelligence after launching several robots to aid worshippers at Masjid al-Haram (the Grand Mosque) in Makkah.

Unveiled by Abdul Rahman Al-Sudais, the general president of the Two Holy Mosques, the robots will communicate public messages, which includes relaying sermons and adhans (calls to prayer).

Pilgrims can also use voice commands to ask for general information from the robots, such as details about the imams, muezzins and the weekly itinerary.

The robots are part of Saudi's 'smart campus' project, which is in accordance with the country's Vision 2030 and the Presidential Strategic Plan 2024.

Saudi Arabia launched the plan in 2016 to help open up the country and encourage foreign investment as it weans itself off the revenues from oil.

In July, Saudi welcomed over a million worshippers from all over the world in the biggest Hajj pilgrimage since the coronavirus pandemic.

During the hajj period, it introduced several smart robots, including robots that cleaned the masjid floor and distributed Quran to worshippers.

New state of the art robots have been launched at the Grand Mosque to distribute the Holy Quran to worshippers as they finish their Hajj journey#Hajj #Quran #Robots pic.twitter.com/j2Jmx35anV

A fleet of robots also assisted female worshippers in 11 languages, answering questions about the holy sites and allowing women to communicate with scholars.

The authorities responsible for Islam’s holiest sites have #announced a new fleet of #robots, who can assist female worshippers in 11 languages. The robot fleet will also answer questions about the holy sites and allow women to communicate with scholars.#Mecca #SaudiArabia pic.twitter.com/L5kZt4DEXT

The initiative was part of an exhibition by Exhibitions and Museums Affairs Agency and Umm Al-Qura University to use VR and digital experiences to display historical and religious artefacts.