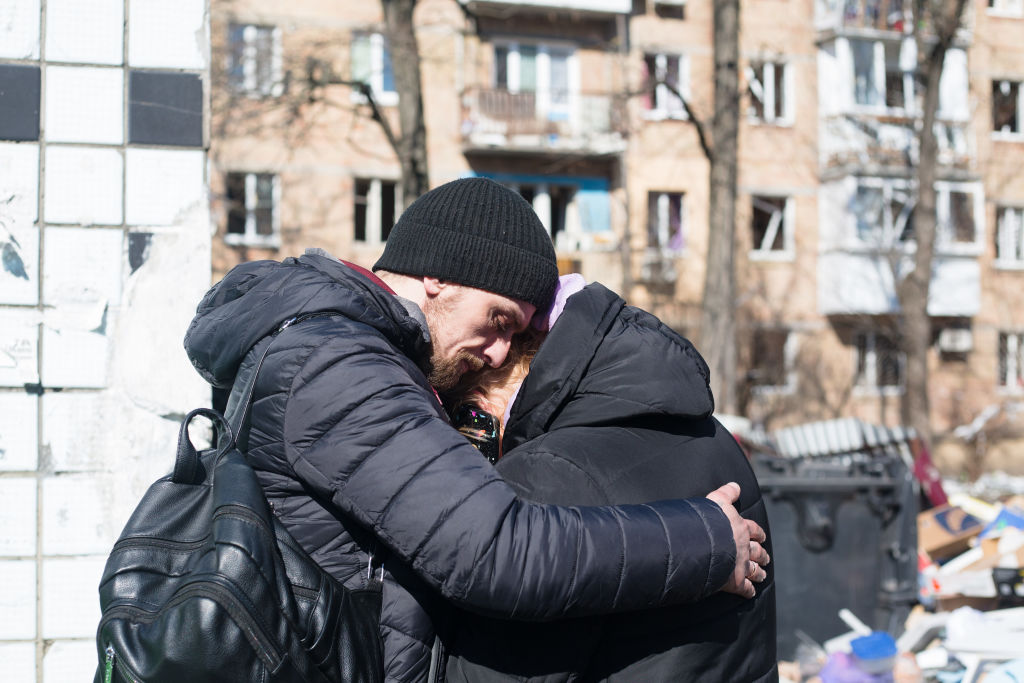 ‍Political commentator Hamza Ali Shah draws parallels between the plight of Ukrainians and Palestinians and highlights the double standards of how the two struggles are viewed and reported.

As a Palestinian, I am entirely aware of how gruelling the quest for liberation can be.

The death and destruction in Ukraine following Russia’s invasion in the last month has been harrowing. As millions of lives are lost or permanently transformed, it serves as a reminder of the punishing humanitarian consequences of war and why it should be avoided at all costs.

For the Palestinian community, empathising with the Ukrainian people will come very easily due to the regrettable resemblance of the two struggles: a perpetual conflict which violates international law, consists of crimes against humanity and results in an uncompromising and illegal occupation.

Yet despite the remarkable parallels, the reactions could not have been starker in contrast. As Russia’s violence intensified, the outpouring of support for Ukrainians across the globe was as decisive as it was jaw-dropping. For once, there was categoric and unanimous condemnation and diplomatic, financial, military and medical assistance on hand immediately.

This was alien to see for us. When it comes to Israel’s violent colonial domination and the international community’s response, we are given lip service at best and brazenly disregarded at worst.

Witnessing such robust backing and an unwavering commitment to thwart Russia’s aggression, it was hard not to feel despondent. The 70+ years of Palestinian ethnic cleansing has not once received this level of support.

And now it is unequivocally clear that was a conscious choice all along.

That is not to diminish the brave resistance in Ukraine or the widespread support they have received. It is refreshing to see such steadfast opposition to imperial invasions and the illegal occupation of land. Rather it is to point out that when it comes to the global community’s outlook on human rights, what should be an ethical imperative to unconditionally help the vulnerable, is instead replaced with a hierarchy of importance.

Indeed, the very methods that have been successfully utilised to isolate Russia are criminalised and sabotaged when Palestinians employ them against Israel. Nowhere is this more apparent than with the Boycotts, Divestment and Sanctions movement.

The overarching reaction from Europe across to the United States has been to sanction Russia. From oligarchs, to oil and gas exports, to Russian ministers and Russian banks, the sanctions have been emphatic and targeted every possible avenue. The sanctions proved effective as the Russian ruble significantly weakened,  while major companies shut down their operations in the country as Russia was unplugged from the world’s financial system.

It was close to job done as far as British prime minister Boris Johnson was concerned, who had announced the ‘largest ever’ set of sanctions against Russia. For opposition leader Keir Starmer, it was still not enough. He reiterated the need to go further and faster with sanctions.

And therein lies the problem. This is a political class that is in accord about the usefulness of sanctions, but ostensibly, only when applied in specific circumstances. In fact, Keir Starmer has been on the record on several occasions condemning BDS and their ‘counterproductive’ methods, meanwhile Mr Johnson and his party are working on legislation that will make the BDS movement in the UK illegal.

The supposed stalwart defenders of liberal democratic values are keen to punish Russia for its war crimes whilst simultaneously shielding Israel from suffering the same fate. It is therefore unsurprising that Israel continues to act with impunity: at least 20 Palestinians have been killed by Israeli forces since the start of the year.

To compound matters, these double standards are discernible in every sphere. It is often stated that sport and politics should never mix.

When Gaza was being remorselessly pummelled by Israel last May, several Premier League footballers expressed their sympathy by raising the Palestinian flag. The most notable example being Leicester City’s Hamza Choudhury and Wesley Fofana following their FA Cup final victory. This was condemned in certain quarters, with some journalists describing the gesture as ‘troubling.’ This is in line with the football industry’s historic manner of working when it comes to Palestinian solidarity.

The Scottish club Celtic haves twice been fined by UEFA for displaying the Palestinian flag in Champions League matches. Their justification being it breaches Article 16.2 of their disciplinary regulations which prohibit ‘the use of gestures’ that are ‘political’ and unfit for a ‘sports event.’

However, UEFA then proceeded to strip St Petersburg’s Gazprom Arena of the Champions League final location in solidarity with Ukraine following the invasion. The recurring theme is that some conflicts are seemingly deemed more worthy of championing than others. An Egyptian squash player recently addressed the elephant in the room when he questioned why sports people are allowed to talk about Ukraine but not about Palestine.

It is worth noting that these inconsistencies are not confined to the Palestinian cause and instead exist across the board. The war in Ukraine merely crystallised the extent to which they exist.

At the Polish border, for example, it has been heart-warming to see Ukrainian refugees embraced with open arms and sheltered without question. But it was only a few months ago the military was being deployed at the Poland-Belarus border and forcing mostly Middle Eastern refugees back even in freezing temperatures.

If there is a sense among some communities that their lives are deemed inferior, the mask slip in the last month across Western media platforms has provided the painful confirmation. Commentators and journalists unambiguously exposed their selective solidarity, hinting that the ‘civilised’ European people with ‘blonde hair and blue eyes’ are in greater need of saving.

The uncomfortable truth is plain for all to see; for the Western world, some lives simply matter more.

Hamza Ali Shah is a political researcher and writer based in London. He has previously written for Tribune Magazine, Byline Times and The New Arab.